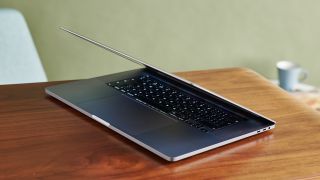 Apple appears to be courting the professional market, with rumors that it's working on a ‘Pro Mode’ that could give a free performance boost to MacBooks.

A reference to a new Pro Mode was found in the latest macOS Catalina 10.15.3 beta build, and it looks like it’s an option that can be turned on and off by users.

The code in the new beta build states that with Pro Mode turned on, “Apps may run faster, but battery life may decrease and fan noise may increase” and “Fan speed limit overridden”.

So it seems like this mode can give a performance boost to a MacBook, but at the cost of reduced battery life and noisier operation as the fans spin up to keep the device cool.

This means that Pro Mode would only be something you’d want to use to give your MacBook a temporary boost; in fact, the code also mentions that Pro Mode will switch off automatically the day after it's activated.

While any MacBook owner would certainly like to get a performance boost for free, we’re not entirely sure who will benefit from this at the moment. As 9to5Mac points out, it appears that it will only be available for MacBooks, and not Macs (nor other Apple devices like iPads and iPhones).

There's also speculation that this mode will only be available to recent models, such as the MacBook Pro 16-inch, which uses a new thermal design.

Because of the strain the Pro Mode puts the MacBook under, along with its name, it’s clear that this is a feature aimed at professional users who need to eke out more performance when using certain applications and performing intensive tasks, such as rendering video.

Regular users who just want a free upgrade may be out of luck, unless you have one of Apple’s latest MacBook Pros, and don’t mind sacrificing battery life and enduring increased fan noise.