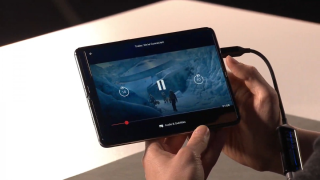 Have you ever tried to stream a video on the bus? You know how it is – the latest Marvel movie trailer has just been posted by your friend on Facebook, and you don’t want to wait until you get home to see what all of the fuss is about. So you hit the link and…hope for the best.

If you’re lucky, the video will play without a problem over 4G, but if you’re unlucky, you could quickly see the action paused, as a circle of dots tells you that Spider-Man is currently buffering. And when it does play, you can’t really work out what's happening because the action has turned into a low-resolution mess of coloured blocks.

The problem with 4G is that sometimes there just isn’t enough bandwidth. If too many people are trying to connect within the same area, your download speeds are being shared with everyone else – which is why it can sometimes be so unreliable.

But luckily, the solution is just around the corner. Over the next couple of years 5G is going to arrive and transform our mobile video experiences.

For a start, watching video is going to become a lot more reliable, particularly in terms of download speeds. As 5G hype builds, this means you can expect to see lots of crazy claims about how you’ll be able to download full HD movies in just seconds.

Though it will be significantly faster than 4G, 5G will probably never live up to those claims, simply because you will still be sharing the connection with everyone else in your local area.

But don’t worry, 5G is still expected to be around 20 times faster than 4G – and the benefits go beyond speed. 5G uses parts of the electromagnetic spectrum that will mean signals are better at penetrating buildings – so you can expect a more reliable connection when indoors. If we’re lucky, we may even be able to get a reliable signal when travelling through more remote areas on train journeys.

The other major boon is with regards to latency – this is the speed at which your device can exchange data with the internet. This will be most significant for gamers who need fast response times when playing online games like Fortnite, but it will also make watching video better too, as there will be less lag between hitting play on a video and it actually playing.

What’s perhaps more interesting though, is to consider the second-order consequences from this technological shift – not just how 5G will make downloads faster, but how 5G could change our behaviour.

For example, today if you’re planning to watch some Netflix or catch up with Amazon Prime Video, you have to plan ahead and download what you intend to watch on to your device ahead of time to get the best experience.

With 5G, and near ubiquitous connectivity, streaming will become the default option and you’ll be able to trust that the bandwidth and connectivity will be available when you need it.

It also goes without saying, that 4K streaming over the air should also become routine, which will be just in time for 4K screens on phones to become commonplace.

Of course, 5G isn’t just going to change us – it’s going to change where we get film and TV from too, and upset the industry in the process. It’s going to accelerate the process of unbundling and 'cord-cutting', as the idea of watching TV will be further divorced from the need to have Sky or Virgin Media in the UK, or Comcast or Verizon in the US – why would we want to pay for bundles when apps will let us download what we want specifically, over 5G?

Given the bandwidth 5G enables, it is likely that, just like how many millennials have never had a landline phone, future generations may not even bother getting a home broadband connection.

5G could also have a really big impact on the types of content we consume. For example, with ubiquitous connectivity, will we be producing more video content ourselves than ever?

Will Hollywood films find themselves challenged by our friends' live streams, or the hoards of ‘influencers’ creating YouTube videos?

The lines between games and film could also continue to blur. Following the success of Bandersnatch, the interactive episode of Netflix’s Black Mirror, there was a lot of excitement around the possibilities from branching narratives.

But as Cnet argued last year, this could only be the start. In the 5G world, we won’t be watching video on dumb screens – our phones have other sensors built into them, like a camera and gyroscope.

What if films could watch us watching them, and adapt the experience based on how we react? 5G’s increased bandwidth and connectivity could make this viable for big-budget film.

And perhaps strangest of all, the actual shape of the pictures we watch could change too. If we’re consuming more video content on our phones, then it stands to reason that more content will be produced with phones – and not just TVs – in mind. This could lead to more professional quality film designed for portrait mode.

In fact, there are already some exciting examples of this, and one of the most striking is Eva Stories. This is a film that is premised on the question of what would it be like if a girl had Instagram during the Holocaust?

This might sound like a silly idea, but the project takes its subject seriously, and presents an entire narrative experience, educating viewers about the horrors of World War II, telling the story entirely through Instagram Stories that rely heavily on video.

We think of a lot of social media video today as being trivial or disposable – but it stands to reason that as we consume more content using 5G, filmmakers will start to take phone viewing more seriously.