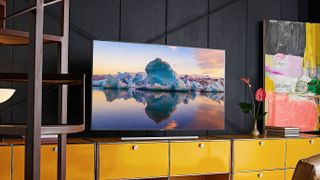 You may not think of your TV being susceptible to this kind of attack, but if you have a smart TV that’s connected to your Wi-Fi network, it could be a target for a hacker – just like a smart speaker, smart display, or smart security camera.

Aside from the troubling prospect of losing access to your smart TV apps like Netflix and Amazon Prime Video, many smart TVs come with microphones built in – and the idea of someone hacking into your TV in order to eavesdrop on your conversations is concerning, to say the least.

The possibility of smart TVs falling victim to malware or viruses has been brought to the world’s attention recently after Samsung’s support account sent out a tweet urging users to scan their TVs for malware regularly... and then hastily deleted it that same day.

Thanks to Internet Archive's Wayback Machine, we know that the tweet read as follows:

“Scanning your computer for malware viruses is important to keep it running smoothly. This also is true for your QLED TV if it’s connected to Wi-Fi! Prevent malicious software attacks on your TV by scanning for viruses on your TV every few weeks.”

The tweet was originally accompanied by a demonstration video showing you how to scan your Samsung TV. Unfortunately, that’s been lost to the ether.

That’s why we’ve put together this handy guide to scanning your Samsung Smart TV – read on for everything you need to do.

How do I scan my Samsung TV for malware?

Scanning your TV is really easy. First, head to the settings menu on your Samsung TV and select General. Then click on System Manager and scroll down to Smart Security.

Click on Smart Security, then select Scan and your Samsung TV should start scanning for viruses and malware.

How often should I scan my smart TV?

In its now-deleted tweet, Samsung recommended scanning your TV “every few weeks”.

If you think you’ll struggle to remember, you could always set a reminder on your phone that recurs every three to four weeks.

Can your smart TV really get hacked?

Absolutely – but it’s not exactly a common occurrence. In 2018, Consumer Reports found that “millions of smart TVs can be controlled by hackers exploiting easy-to-find security flaws”, including Samsung smart TVs.

That’s not a reason to panic, though. Javvad Malik, security awareness advocate at KnowBe4, told TechRadar that "at the moment, there is no evidence to suggest that malware is targeting TV's, but that's not to say it won't be the case in the future.”

Since then, Samsung has provided a number of security updates to its smart TV platform, Tizen, including enhanced security controls on its smart TV keyboard and “enhanced validation measure for remote control of the TV”.

Better to be safe than sorry in any case, and follow Samsung’s recommendation to scan your TV regularly.