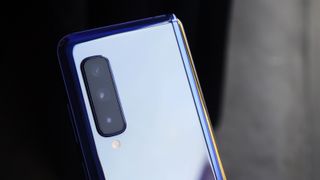 We're expecting to see a new Samsung Galaxy Fold 2 foldable phone debut alongside the Galaxy S11 (or S20) on February 11, and while we've got a vague idea of what it will look like, we've heard a few rumors about what it will be called – and now yet another name has been brought up.

This new name is 'Samsung Galaxy Z Flip', which is probably our least favorite name for the new device yet, and it was brought up by esteemed leaker @UniverseIce. It's not clear where this information came from, but @UniverseIce tends to have a fairly good track record, which is why we're reporting on the leak in the first place.

While we'd defaulted to calling the upcoming foldable phone the 'Galaxy Fold 2' (as it's a successor to the Galaxy Fold) a prior leak suggested it would be released as the Galaxy Bloom.

We'd previously heard the device had the codename 'Bloom' but we were surprised to hear the suggestion that this was the actual release name, and now that there's a new potential name, Bloom is looking ever less likely.

We're expecting the Galaxy Fold 2 to have a 'clamshell' design, somewhat like an old flip phone, therefore the name 'Flip' would be appropriate. Saying that, the letter 'Z' is a bit confusing – it suggests the phone will fold like the letter z with two hinges, like how several concept foldable phones close.

Even without the evocation, the letter Z is a confusing addition to the name, so it could be that this is only the name in China, where Samsung already has a range of flip phones, and therefore the letter would be useful to differentiate them.

It's also worth pointing out that @UniverseIce previously mentioned the Galaxy Bloom too, although they certainly didn't champion it as much as other parties did.

We're a little skeptical of the Z Flip name, as our tone suggests, but then again we were dubious when @UniverseIce suggested the Samsung Galaxy S11 would actually be called the Galaxy S20. Now, most leaks are suggesting that newer name is correct, so perhaps the Samsung Galaxy Fold 2 really could come out as the Galaxy Z Flip.

We're not really looking forward to newer, weirder names being suggested though.