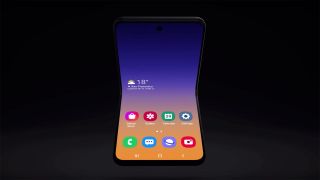 We've heard rumblings that Samsung was developing a foldable clamshell phone, a form factor that was teased by the South Korean electronics giant itself in a concept video it released back in October 2019.

Now, it appears the handset is very much a reality, with the company reportedly revealing the device, dubbed the Samsung Galaxy Bloom, to attendees of a secret meeting held at CES 2020 overnight.

Previously considered a codename, a new report out of South Korea is alleging that Galaxy Bloom will actually be the device's go-to-market name, and not Galaxy Fold 2 as originally speculated.

Intriguingly, the report also states that the Galaxy Bloom will not sport a plastic screen like the original Galaxy Fold, but will instead be covered by a new glass material called 'UTG' (Ultra Thin Glass).

According to the translated report, Samsung CEO DJ Koh explained to attendees that the company drew inspiration for the Galaxy Bloom's design from French cosmetics company Lancôme, which is famous for its clamshell-style powder compact cases.

SamMobile reports that this particular design was chosen because the Galaxy Bloom will be targeted towards a younger female audience, which is already familiar with this form factor.

That's all we know about the device so far, but we expect Samsung to officially unveil the Galaxy Bloom at its next Unpacked event on February 11. As always, we'll keep you updated on any Galaxy Bloom developments as they... err... 'unfold'.