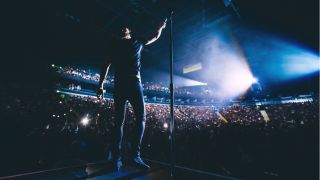 It might sound like something out of dystopian sci-fi series Black Mirror, but using artificial intelligence to uncover the next big pop star is very much a reality, according to "the world's first AI-enabled record label".

The label claims that this algorithm allows it to identify "undervalued independent artists" within days of them releasing music, compared to the weeks and months that Snafu says traditional record labels take to discover unsigned acts.

So, what is this algorithm looking for exactly? Apparently, the technology searches for the "earliest indicators of a hit" right from the first day a song is released on streaming platforms and social media networks.

These indicators include streaming figures, blog posts, tweets, and playlist additions – and then, using artificial intelligence, Snafu says it can predict which artists are likely to take off, based on "sentiment analysis, song structure, decision trees, and neural networks".

There's still a degree of human decision-making though; 15 to 20 of the "most promising" artists are then analyzed by the label's team.

While the idea of AI algorithms deciding which artists will be popular may initially be off-putting to music fans, Snafu's CEO Ankit Desai, thinks it's a necessary step in changing the old-fashioned methods of artist discovery used by the music industry today.

Speaking to TechCrunch, he said: “If there’s some girl in Indonesia whose music the world is dying to hear, they’re never going to get the chance.The bridge to connect her to the world doesn’t exist today. The music business is entrenched in a very old way of working, finding artists through word-of-mouth.”

The label has already seemingly found some success with this method, too. One duo called Joan had 2,000 followers and were discovered and signed a day after their first song was released, using Snafu's AI algorithm.

Since then, they've hit "over 20 million cross-platform streams", according to the label. True, there's no way of knowing whether Joan would have been discovered organically by another record label – and indeed, whether it's good for an artists' long-term career to be snapped up by a record label so soon after their first release.

Still, those numbers are pretty compelling, and it could only be a matter of time before big labels like Sony, BMG, and Universal develop their own pop star-finding algorithms.