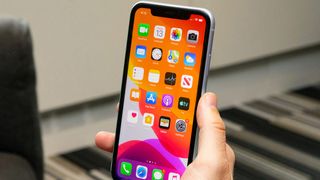 iPhone SE 2 Plus might look similar to iPhone 11, above, but have a different scanner (Image credit: Future)

We’ve waited a long time for the iPhone SE 2, and the wait still isn’t quite over, but we’re already hearing about the iPhone SE 2 Plus – a phone that might launch in the first half of 2021, and that might have a new design for its fingerprint scanner.

That’s according to Ming-Chi Kuo (an analyst with a good track record when it comes to Apple information), in a research note seen by MacRumors.

The iPhone SE 2 Plus name has been thrown around before, and Kuo has previously said that the phone will have an all-screen design (presumably like the iPhone 11 range) with a 5.5 or 6.1-inch display, but with no Face ID. Instead, it will have Touch ID built into the power button on the side of the device, so there’s no need for a button below the screen.

A new design for a better experience

Now he’s restating that claim, adding that the fingerprint scanner will sport a “new design” for an improved user experience. It’s not clear though whether by new design he simply means the new position and shape required by having it on the side of the phone, or whether there’s more to the change.

He’s also now stated that the iPhone SE 2 Plus will have an LCD screen, which is no surprise given that by being an ‘SE’ handset it’s positioned as a budget model.

What is surprising is the name. If it really doesn’t launch until 2021, and it has a different design to the iPhone SE 2 (which isn’t currently rumored to have a side-mounted scanner) then you’d think Apple could just call it the iPhone SE 3, but maybe the internals will be similar.

It also might land before 2021, because another source has said to expect the iPhone SE 2 Plus in late 2020. Either way, we probably won’t learn much more about it for a while, and won’t see it officially until after both the iPhone SE 2 and iPhone 12 range have launched.