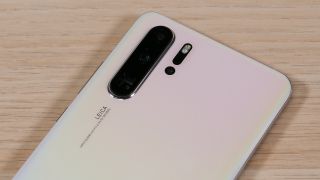 The Huawei P40 Pro could have a much better camera than the P30 Pro, above (Image credit: Future)

Low light photography on phones has improved enormously in the last few years, and the Huawei P40 Pro could take it forwards even more, as the phone reportedly has a 52MP camera that can combine sixteen pixels into one.

That’s according to information obtained by MyDrivers, and it would mean that the camera could take 3.25MP photos where each pixel is essentially far, far larger than it would otherwise be (16 times bigger, to be exact), and that larger size can massively improve the quality of low light images, as it lets the sensor 'see' more light.

Of course, on the flip side, using that few megapixels reduces the amount of detail that can be captured, but 3.25MP is enough for 1080p video, so this could be very advantageous when shooting video at night. For photos, it’s likely that software would be used to enhance the detail.

This would be the first time we’ve seen this 16-in-1 technology used in a phone, but other handsets such as the Xiaomi Mi Note 10 use Quad Bayer (4-in-1 pixel tech, as opposed to Quad Quad Bayer of 16-in-1) tech to combine four pixels into one, so this is the same idea.

Indeed, it’s expected that the Huawei P40 Pro’s 52MP lens will also be able to do a 4-in-1 output for 13MP photos, splitting the difference between the detail you’d get with a full 52MP shot with small pixels (which may well also be possible) and the low light quality of a 3.25MP shot with massive pixels.

Twice the prisms for twice the zoom

The same source also echoes earlier claims that the Huawei P40 Pro will have a 10x optical zoom lens, explaining that this will be made possible by using a dual-prism design, where 5x zoom lenses on smartphones use a single prism.

Additionally, they note that Huawei has trademarked a number of terms which might provide clues to features of the phone.

There’s ‘Quad Curve Overflow’, which almost certainly refers to the screen that’s rumored to curve along all four edges, then there’s ‘Ultra Vision Camera’ and ‘Ultra Vision Sensor’, which will surely refer to some of these rumored impressive photography skills, and ‘5G AR’, which suggests Huawei intends not just to offer 5G on the phone, but also to work some augmented reality skills in with it.

Of course, nothing is confirmed just yet, but we’ll know the truth before long, as Huawei is set to unveil the P40 range in late March.