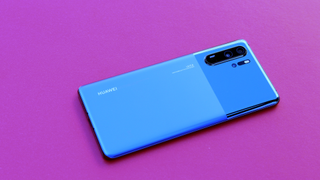 In early January a Huawei P40 Pro leak suggested the upcoming smartphone will have a flat screen, unlike its predecessor, and exactly a week after that news broke, we're bringing you news of another leak that says... completely the opposite.

This comes from Twitter user @RODENT950, a contributor to tech leaks site Slashleaks who has a fairly good (although not exactly lengthy) track record.

They posted a series of images of what seems to be a Huawei P40 Pro screen protector, which shows what we were hoping all along – the phone could come with a curved screen.

The images of the screen protector, intriguingly, don't show a notch for the front-facing camera, which has lead many to believe that the phone will have a 'punch-hole' cut-out segment at the top of the display for the camera instead.

The screen protector photos show that the curve is more angular than on the Huawei P30 Pro. So it seems Huawei is copying its Mate 30 Pro to a degree, as this had a steep 'waterfall' curved screen at the sides.

Something that these screen protector images don't show, however, is a screen that curves at the top and bottom of the device, as we've heard the Huawei P40 Pro will have. For some context, while some phones have displays that curve at the sides, none have screens that are angled at the top and bottom, so this would be a first.

One other thing suggested by @RODENT950 is that the main camera on the Huawei P40 Pro will be a 52MP snapper, one which uses 4-in-1 pixel technology to take 13MP pictures (although presumably with a 52MP output option too).

That contradicts previous rumors we'd heard that suggested the device will have a 64MP main camera, and there are reasons that both could be plausible.

In defense of the 64MP theory, we already know Sony has a 64MP sensor that's been in a few phones now, from various companies. It would be very easy for Huawei to use this Sony sensor in its phone, as most Huawei cameras combine Leica lenses with Sony sensors (which is some lovely alliteration).

The 52MP sensor is plausible though, as in the P30 series the company shied away from a top-MP sensor, with a 40MP snapper instead of 48MP, which was the top-end option at the time. Instead, it used SuperSpectrum sensing which 'saw' RYYB instead of the RGB of most sensors, which made pictures seem brighter and more vibrant.

We could see Huawei do the same in the P40 series, with a phone that packs a lower-res main camera so it can facilitate the return of SuperSpectrum.

Of course, this is all based on rumors and speculation which could turn out to be totally off base. We're expecting the Huawei P40 series of phones to be shown off in March 2020, but stay tuned to TechRadar before then for all the latest leaks and news.