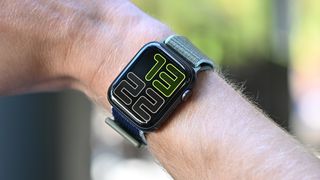 Apple could be on the verge of launching a Product Red edition of its Apple Watch, to go with the Product Red iPhones and iPods that it has previously sold.

Details of this potentially upcoming device were spotted in an Apple database by WatchGeneration, with a new reference number separate from the existing models, before they were swiftly removed.

Make of that what you will, but it wouldn't be a huge surprise if a Product Red Apple Watch was on the way, considering Apple's previous partnerships with the charity.

Who watches the watch makers?

The Apple Watch 5 was only launched in September, so it's a bit early for an entire refresh, but Apple might release a new Product Red model sometime in the first few months of 2020 just to keep interest ticking over until September 2020.

It seems that any Product Red Apple Watch would be priced at the lower end of the range, using an aluminum casing and matching the color of the Product Red iPod Touch.

The cheapest Apple Watch Series 5 can be yours for $399 / £399 / AU$649, so expect any Product Red edition to be somewhere close to that. Of course for now this is just speculation until Apple says something officially.

We're still a long way off from the Apple Watch Series 6, but from what we've heard so far, it could come with a new microLED display technology, longer battery life, better water resistance, and more reliable connectivity. Who knows, it might even come in red.