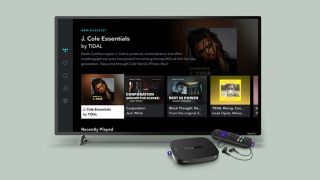 If you have a Roku streaming device, like the Roku Streaming Stick+, you can now add Hi-Res Audio streaming platform Tidal to your apps.

Tidal, which counts Spotify and Amazon Music Unlimited among its biggest rivals, is a  streaming platform designed for audiophiles with a penchant for high fidelity audio, streaming music in the form of 16bit, 44.1kHz FLAC files with a bitrate of 1411kbps.

In other words, its whole purpose is to make your streamed music sound as good (if not better) than your old CDs.

The different between Premium and HiFi tiers is the quality of the music files streamed. The lower tier limits you to the same music quality as Spotify's Premium offering, whereas the HiFi tier will unlock CD-quality lossless music streams.

The new partnership follows the announcement that Roku is expanding its audio lineup to include a soundbar and a wireless subwoofer, joining its existing Roku TV Wireless Speakers.

With four speakers (two for each channel), it's capable of playing content from services like Netflix, Amazon and others in 4K HDR, as well as playing your audio with Dolby Sound.

If the soundbar alone isn't bassy enough for you, you might be interested in Roku's Wireless Subwoofer, which drives 250W of power through 10-inch woofers – once paired with Roku's Wireless TV Speakers or Smart Soundbar, the system will automatically allocate low frequencies to the Sub to unlock a more immersive soundstage.

It costs the same as the Roku Smart Soundbar ($179), and both speakers are available to pre-order in the US – they're expected to land on shelves in October.

Global pricing and availability is still to be announced, but Roku says that this will be confirmed at a later date.