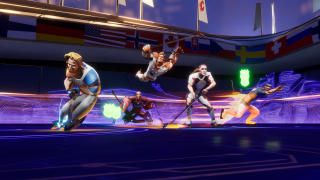 Apple Arcade’s $5-per-month subscription service has a large library of games but no truly must-have titles - but that might change. Apple is taking a big swing with a new game, Ultimate Rivals: The Rink, that pits your favorite pro football, soccer, baseball, and hockey players against each other - to, well, play hockey. The game is live now on Apple Arcade.

It’s a fanciful premise, and the game is indeed a more casual take than the accuracy-obsessive sports sims on the market. Instead, Ultimate Rivals: The Rink, the debut title for seven-year-old indie developer Bit Fry Games, is an arcade-style game that takes its cues from older classics like NFL Blitz and NBA Jam with cartoony versions of famous athletes and exaggerated sports action.

Games have tried to resurrect the dormant ‘arcade sports’ subgenre and failed in an era dominated by realistic EA Sports and 2K Sports franchises, but those experiments didn’t have a roster that included LeBron James, Mike Trout, Alex Morgan, Megan Rapinoe, Skylar Diggins-Smith and Alex Ovechkin. The 58-player launch lineup will be grown over time - and considering it also includes Wayne Gretzky as the sole non-current player, might add more legends later on.

Ultimate Rivals: The Rink deviates further from sports fidelity by shrinking teams down to three-player squads made of a center, a wing, and a goalie. Each athlete from the roster varies in 12 stats, from top skating speed and shooting/passing ability to endurance and ‘turbo’ - all approximated from their performance in their sports of choice.

In play, the game is a little like a video game version of the bubble hockey tables that inhabit pizza taverns and bowling alleys. You can pass, shoot, sprint-skate (‘turbo’), and - when you’ve collected enough power-up coins - activate an ultimate ability. The latter are silly and superpowered, letting Trout clobber enemies with baseballs, Rapinoe kick a quintet of balls in every direction, or James activate a three-point line in the other team’s end zone.

In other words, hockey that’s been miniaturized and spiced-up for the mobile gaming crowd - a Rocket League with pucks and sports stars. While Apple Arcade also works on Macs and Apple TVs, the game will likely see most play on the go, and there’s just enough complexity for the game to fit comfortably on an iPhone display. Each match spans six minutes divided into three periods of two minutes each. You can play other folks online, or go up against the AI if you happen to be outside cell range.

It’s a low-entry game that’s easy to pick-up-and-play, has no single-player story mode, and features a lot of flashy athletes. This is Apple’s biggest swing for the fences with Apple Arcade - and they’re so confident it’ll be a hit that they’re already calling Ultimate Rivals a franchise. Next up: basketball.

Apple Arcade launched with the tech giant’s signature bravado asserting the service’s value and family-friendliness, but critics puzzled over who would enjoy it most. After all, some of its games are available elsewhere, and only Apple product owners could sign up for and use it. But that uncertainty focused around Apple Arcade’s lack of must-have titles - the games that would convince fence-sitting fans to sign up.

Apple’s been tight-lipped about the contracts behind the service, but we can surmise that the requirement to make all games compatible with a broad range of iPhones, iPads, Macs and Apple TVs scared off some developers. Subsequently, the initial lineup of Apple Arcade games featured a mix of titles -  some delightful, others skippable, and a few transcendent - but seemingly nothing that would drag in the skeptical to fork over $5 per month.

Not the way gamers expect, anyway, given the titanic production budgets that go into making AAA games dazzle players on their high-powered consoles and PCs. The Apple Arcade library has continued to grow with dynamic and new indie games, but nothing that’s grabbed attention.

Ultimate Rivals could be the game that finally pulls that off, though it will still have an uphill battle to convince folks to go to the effort of subscribing (even with the free month trial). EA and 2K’s sports franchises long ago spilled into the mobile realm - and those games are free-to-play.

What Ultimate Rivals has is fantasy - not just to put together your esoteric dream team of players, but to be competitive without needing to memorize leagues-worth of stats or the best tactics from real-world sports.

Part of that fantasy requires some reality, which is why it took Bit Fry seven years to acquire licenses from player associations to put athletes from five different sports into one game. They could have put the game out years ago, but didn’t want to just rehash NBA Jam or NFL Blitz with facsimile athletes. They wanted to make something new.

In taking such a long time, Bit Fry developed an engine around approximating player skill in one sport to apply to another - an abstraction that opens the door to importing other famous (or even fictional) figures into the game.

Or rather, games: Bit Fry is already announcing that the next title in the series will be Ultimate Rivals: The Court, which already has a release window for 'Spring 2020' in the US (Q2 2020 elsewhere). And since they’ve already got a roster of players with approximated skill rankings, they can swiftly turn around and reapply those to basketball-related attributes. If Alex Morgan can kick a soccer ball swiftly down the field, she can surely dribble it quickly down a basketball court.

And since its sports, there will always be more pro athletes and new underdogs that capture the headlines - and then, with a little coding magic, those players can show up on your fantasy hockey squad overnight.