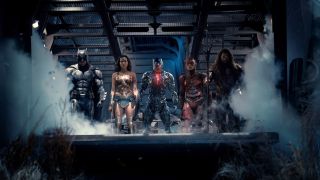 Update: THR reports that there are no plans to release the Snyder Cut, according to a Warner Bros insider.

Original story: Ever since 2017's dreadful Justice League movie, which ended up being partly directed by both Zack Snyder and Avengers' Joss Whedon, a certain vocal contingent of DC fans has rallied behind the hashtag #ReleaseTheSnyderCut. This is based on the belief that a different edition of the movie exists, one presumably more in line with the darker tone of Snyder's previous DC efforts, Man of Steel and Batman Vs Superman: Dawn of Justice.

Now, stars Ben Affleck and Gal Gadot have both tweeted the hashtag within a few hours of each other, leading some to believe this is the prelude to an announcement of the real thing.

Snyder himself followed up to each tweet. It was unclear for a long time whether this version of the movie actually existed – until this past March, when Snyder mentioned at a fan event that it does, at least in some form.

Interestingly, this follows a rumor on We Got This Covered from last week that suggested the cut's release might be announced for the upcoming HBO Max streaming service before the year's end.

That was a little hard to believe until two of the film's biggest stars weighed in just a few days later. It seems unlikely any new cut of Justice League would get a significant release in cinemas, given that it was considered a box office flop relative to its massive budget (a rumored $300 million), but HBO Max actually seems like a good fit. Warner no doubt wants to grab headlines with its new streaming service, and this is clearly something that at least a portion of fans want to see. It could be a match made in heaven.

This feels more like a co-ordinated marketing beat than two major actors just happening to join a fan movement roughly two years after it first began. Ben Affleck, for his part, announced that he was exiting 2021's movie The Batman earlier this year, having previously been attached to direct it. Maybe tweeting this is just solidarity with a director he respects, but it feels like something more.

And Gal Gadot, of course, is still in the DC Universe fold, starring in next year's Wonder Woman: 1984. If these tweets are a sign of anything, it's unlikely we'll have to wait too long to find out what it is.

Something to keep in mind, though, whatever happens: that movie will need a lot of work to even approach being watchable.