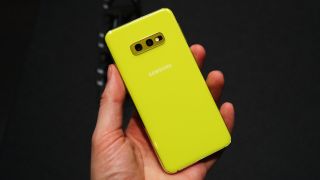 Case renders suggest the S11e will have a very different camera layout to the S10e, above (Image credit: Future)

Shared by SlashLeaks, the renders for both phones show an all-screen design with a single-lens punch-hole camera at the top center. It seems also that the screens are less curved than the Samsung Galaxy S10’s, as has been rumored.

Moving on to the back, that’s mostly obscured by the case, but what we can see is a large rectangular camera block in the top left corner. In the case of the Galaxy S11e this appears to house three lenses, while for the standard Samsung Galaxy S11 it looks like it could house up to five.

This, as noted, is all stuff that we’ve seen and heard before, but seeing the design again here increases the likelihood that it’s accurate.

Having said that, we’d definitely take these images with a pinch of salt, especially as while case-makers sometimes have advance information about the design of a phone, they also sometimes base their early designs on leaks and rumors. So the reason these case images look like earlier renders could be that they’re based on them.

There have been enough leaks now, though, that it’s likely this design is broadly accurate. We should know for sure before too long, as the Samsung Galaxy S11 range is likely to be announced in or around February, with sources currently pointing to either February 11 or February 18.