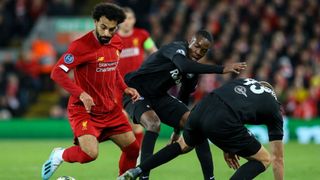 Reigining Champions League champs Liverpool go their game with Red Bull Salzburg knowing a win will ensure them a place in the knock out stages of the tournament.  Scroll down to find out how you can grab a Salzburg vs Liverpool live stream, no matter where you are in the world.

It's unlikely to be a procession to the next phase for the Reds tonight in Austria however. Hosts Red Bull Salzburg may be off the pace, but they still stand a chance of qualification and will be going all out for a win.

Red Bull showed plenty of fight in the reverse fixture at Anfield, coming from three goals down to draw level, only to finally succumb to a Mo Salah goal.

Red Bull Salzburg vs Liverpool live stream - where and when

While ultimately in vain, that comeback will likely bring confidence to Red Bull as they approach playing a team who look unstoppable in their domestic completion.

Mindful of a busy upcoming Christmas period, Liverpool boss Jurgen Klopp has been rotating his starting line-up in recent weeks, but expect the Reds to field their strongest 11 today.

Read on to find out how to watch what looks set to be an entertaining encounter - it's TechRadar's guide to getting a Salzburg vs Liverpool live stream.

Scroll down to find out your football viewing options for tonight's match in some of the major Champions League watching countries around the world. And if you're out of the country and are worried that you won't catch the game, don't sweat. With the option of using a VPN service, you can tune into this fixtures no matter where you are in the world. And best of all, it's really easy to do.

A VPN allows you to change your IP address so you appear to be in a completely different location. We've tested hundreds of VPNs and can recommend ExpressVPN as the best VPN service currently available.

How to stream Salzburg vs Liverpool live in the UK

Subscription channel BT Sport again has exclusive rights to show the Champions League in the UK, and will be showing every single match of the 2019/20 competition on one of its TV or online channels. Tonight's game will be shown on the BT Sports 3 channel with coverage starting at 5.15pm GMT.

If you're looking to stream tonight's match, the BT Sport app or BTSport.com is where you need to go, enabling mobile, tablet and PC viewing.

How to live stream Red Bull vs Liverpool in the US

Following TNT's acquisition of the Champions League and Europa League football rights, it will be showing more than 340 matches across the two competitions this season, including tonight's clash in Austria.

You can stream the match via Turner's B/R Live  service online, through its app or on the likes of Apple TV, Roku and Amazon Fire TV. It costs $2.99 for a one-time only sub, $9.99 per month or - by far the best value - $79.99 for a whole year and meaning you'll get to see every remaining game of the tournament live.

For the 2019/20 season, live Champions League matches are broadcast in Canada by the ever-growing sports subscription service, DAZN. The channel will be live streaming every single game of the competition, including Red Bull vs Liverpool.

How to live stream Red Bull Salzburg vs Liverpool in Australia

If you're outside Australia and want to tune in to Optus Sport , you can use one of our favorite VPNs above and watch the coverage from another nation. Tonight's match kicks off at 4.55am AEDT.

How to watch Salzburg vs Liverpool in New Zealand

The official broadcaster for the Champions League in New Zealand is Sky Sports. The network will be broadcasting over 100 live games for the 2019/20 competition, including tonight's match, which will be shown Sky Sport 7 with kick off at 5.55am NZST.

The channel to head to for tonight's game in Austria is Sony Ten 2, with the game set to kick off at 10.25pm New Delhi time