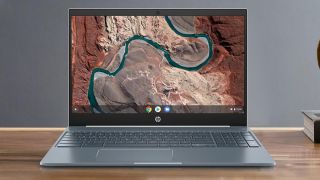 HP is one of the most prolific laptop manufacturers in the world, and in fact is only second to Lenovo in terms of global notebook sales. HP makes a huge number of Windows 10 laptops, of course, but is also very active in the Chromebook arena, producing products like the HP Chromebook 14 which features on our list of the best cheap Chromebook deals.

While that 14-inch notebook is designed to be very wallet-friendly, earlier this year HP decided to bring out a bigger 15-inch model to offer more choices to those who fancy running Google’s Chrome OS.

HP’s Chromebook 15 comes with a mid-range price tag – at least for a Chromebook, although it’s still comparatively cheap compared to Windows notebooks – and as such, it’s an unsurprisingly more premium model than the Chromebook 14.

A number of elements make this machine a more compelling proposition than your average bargain basement Chromebook fare, including a good build quality, a full-size keyboard, not to mention the inclusion of a decent quality Full HD touchscreen. There are two spins on the Chromebook 15: one is the non-touch version, and the other is the touch-capable laptop which we are talking about here.

While we haven’t reviewed the Chromebook 15 Touch, what we can do is thoroughly dissect the specs, and explore what makes this machine worthwhile, giving you our expert opinion on whether it’s worth splashing out the cash to buy HP’s notebook.

With any luck, prices on HP’s Chromebook 15 will see some action in Black Friday week, and will get some downward movement hopefully making the machine a more tempting purchase. Don’t forget to keep checking our best Black Friday laptop deals page this week, for all the top bargains on not just HP laptops, but all notebooks.

The bottom line: A more than solid mid-range Chromebook offering which could be a real tempter for those who want a touchscreen-toting Chrome OS machine with some nice premium touches, including a full-size backlit keyboard.

Cons: Battery life may not be the best. Non-touch model represents a better deal – although Black Friday discounts might change that.

HP Chromebook 15 Touch: everything you need to know

Many of you will already be aware of this, but it’s worth pointing out for the uninitiated in the world of Chromebooks that these are quite different machines to Windows 10 notebooks, and you won’t be able to run traditional Windows apps on them. For more on this, check out our article discussing whether or not a Chromebook might be for you.

As we’ve already mentioned, this is a more mid-range model with some premium-leaning features, including a nice (and suitably roomy, as this is a 15-inch model) Full HD resolution touchscreen. Let’s dig into the specifics of HP’s Chromebook 15 Touch a bit more deeply, starting with that screen…

Display: It’s an IPS panel, meaning wide viewing angles, and it’s nicely sharp providing a decent image quality. The slim bezels – particularly down the side – are a nice touch (pun not intended) which help to afford this laptop a more premium look.

Build quality: HP’s Chromebook 15 is a well-built machine with a metal chassis and a ‘ceramic’ finish on the lid. It looks good, gives that feel of a quality laptop, and is reasonably portable (if just a touch on the heavy side).

Keyboard: HP has used the 15-inch chassis to deliver an impressively spacious full-size keyboard, plus it’s backlit, and what’s more, it comes with a (full) number pad which could be a useful addition for some folks (it’s not something you see on a Chromebook normally).

Pentium CPU: This machine isn’t quite so premium when it comes to the processor. It’s an Intel Pentium model, so dual-core and not the fastest, but then Chrome OS does well on lean hardware anyway, and it’s powerful enough to do the job.

Battery: Battery life is a claimed 13 hours, which sounds great, but some anecdotal reports suggest this HP Chromebook doesn’t reach that figure. That said, others have observed decent enough battery life, but it might not last all day (of course, that can vary widely depending on exactly what you’re doing with the machine).

Conclusion: HP’s Chromebook 15 Touch won’t set the laptop world alight, but it’s a solid mid-range offering with some interesting features to go alongside that Full HD touchscreen, including a full-size keyboard and number pad. It’s a well-built and premium-looking model, and may well be an attractive option given some of the decent discounts which are likely to roll into notebook town with the arrival of Black Friday. Don’t forget there is a non-touch version, too, which is cheaper if you’re not bothered about touchscreen functionality (and some models of that variant run with a Core i3 processor).