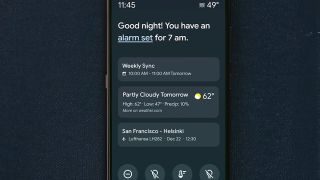 Google wants to make your phone a bit more like a smart display with a new Android feature called Ambient Mode. First announced back at Google IO 2019, the feature is now appearing on select devices.

Essentially, it makes Google Assistant more proactive and easier to access from the lock screen while your phone is charging: you can see calendar appointments, weather forecasts, controls for smart home devices, and more.

Improved notification alerts and music playback controls are coming with Ambient Mode too, even though you can already access these features on the Android lock screen.

According to Ron Amadeo of Ars Technica, the Ambient Mode requires Android 8.1 and is coming to phones from Sony, Nokia, Xiaomi and Transsion, as well as a couple of Lenovo tablets. You can see it in action below.

If and when this Ambient Mode rolls out to other phones (including Pixels) remains to be seen, although it looks like the sort of innovative feature that Google would be keen to push out to as many handsets as possible.

For the time being, all we know is that Android 8.0 is required for Ambient Mode to work, and that it's arriving on the first batch of phones from next week.

And there's more to come, according to Google engineers: they want the Google Assistant to identify when users want to do something, and give them the options (like alarms or smart light controls) ahead of time.

"The ultimate goal for proactive Assistant is to help you get things done faster, anticipate your needs, and accomplish your tasks as quickly and as easily as possible," says Arvind Chandrababu, a product manager on the Assistant for Mobile team.