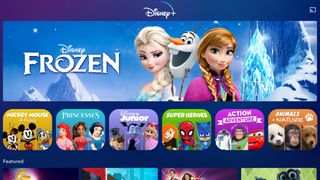 Disney Plus felt like a solid bet from the start. It's a well-priced streaming service that specifically hosts content from Disney and its associated Pixar, Star Wars and Marvel brands – and even though it hasn't launched with absolutely everything from those libraries, what's here is a strong start.

Check out our Disney Plus review for detailed thoughts on the app, but below we thought we'd round up the biggest news pieces and revelations that broke out about the streaming service over the last week. Disney's big test, of course, is yet to come, as it tries to maintain momentum while viewers wait for its heavy-hitter Marvel series.

The Mandalorian is a killer exclusive, but spoilers are the worst

Without spoilers, we're two episodes into The Mandalorian, and it's definitely not what we thought it'd be. If you just expected a show about a kick-ass bounty hunter taking out targets each week, this show has an unexpected focus, based on these opening chapters. Disney Plus's line-up of originals is otherwise slight, with more in the realm of documentaries and reality TV than big-budget dramas. Watching The Mandalorian, though, makes you dream of what the other Star Wars and Marvel series might look like – you can see the money on-screen.

If you're based outside of the launch territories, though, you don't have to look hard to find major spoilers for the Star Wars spin-off. This was such a predictable by-product of launching Disney Plus with a North American focus, and it's no doubt going to make piracy a problem for Disney.

For something as globally beloved as Star Wars, it's disappointing that anyone outside the launch countries has to miss out on this exclusive show, and in an age of social media, there's no escaping discussion about the series.

The launch library is mostly great, and so is clarity on release dates

For animated classics, Pixar and Star Wars, the launch line-up has been pretty great. Even the Marvel movies on Disney Plus, which have some glaring omissions with only 16 out of the 23 MCU films making the cut, managed to double its line-up on the day before launch. Disney Plus promised Disney classics, and it undeniably delivered on this front. If you've ever been a fan of Disney's animated TV shows, too, you've got a real treasure trove to dig into here, from Gargoyles to Recess.

Rather than making you wait until an undisclosed date for its missing movies to become available, too, Disney Plus is refreshingly honest. If you search for a Disney film that's not on there yet because the rights belong to a competitor, like The Incredibles 2 or The Last Jedi or the missing Marvel movies, it'll give you the exact date of when you can watch it. That doesn't apply to all Disney movies released in 2019, like the live-action Aladdin and The Lion King movies, but it means you can identify when your favorite classics will be available.

We knew Disney Plus would include 4K and HDR-supported movies as part of the same single-priced package, but that didn't mean all of the movies offered in 4K were known before launch. The original Star Wars trilogy releasing in 4K, then, was a nice surprise. Even if the heavily-memed Greedo "Maclunkey!" line is a change we probably could've done without.

The Simpsons had an imperfect landing on Disney Plus

The internet was immediately hit with complaints from The Simpsons' diehard fans (which isn't a small group of people, by the way) about the decision to only offer pre-HD episodes of the show in a widescreen format. This meant the original 4:3 aspect ratio was cropped in to achieve the effect, making the show look uglier as a result, and even cutting off certain visual gags. Still, if anything shows the merits of complaining on the internet until something is resolved, it's Disney's quick reaction to this criticism. The studio will add an option to watch the show in 4:3 in 2020.

Another Simpsons story that broke out last week was about a missing episode, 'Stark-Raving Dad', also known as the Michael Jackson episode of the show. That can't be found on Disney Plus, but this wasn't a surprise, as the producers explained earlier this year that the episode was going to be removed from circulation. The reasoning totally makes sense, and it's not like you can't find the show on DVD.

Disney Plus launched with a few technical woes

The demand for #DisneyPlus has exceeded our highest expectations. We are so pleased you’re excited to watch all your favorites and are working quickly to resolve any current issues. We appreciate your patience.November 12, 2019

This one was fairly predictable, but Disney Plus launched with enough outages and login errors that it officially addressed them on social media. This might explain why Disney's rollout of the service is happening gradually, rather than simultaneously across the globe. Can you imagine the outcry on day one if the entire world couldn't access this new service? Instead, the damage was mostly limited to the US, Canada and the Netherlands on release day.

Sensible changes to the app have been made across the week, too, like adding a more reliable resume function than we had at launch.

Some of the movies on here are really weird

We rounded up a whole list of the weirdest Disney Plus movies, from dog DAs to horrifying Wizard of Oz sequels. Disney might be most famous for its animated classics, but a lot of nonsense has made it out over the years, too. Speaking of which: the Beverly Hills Chihuahua trilogy won't make it to Disney Plus until 2020 onwards, sadly.

And finally: feel-good sports movies are somehow a whole genre on Disney Plus

Disney doesn't have so many movies on its service that it's difficult to navigate, but it's still handy that the landing page breaks down its movies by genre, from musicals to animated movies from the Disney Vault.

One of those genres? 'Feel-Good Sports Movies'. You forget just how many of these Disney have made. This is where you'll find films like The Game Plan, Remember the Titans and many more. Fans of The Mighty Ducks, though, will sadly have to wait: that movie isn't coming to Disney Plus until 2020.