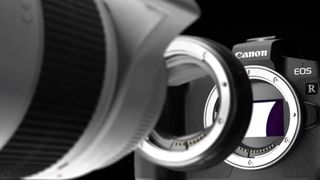 When Canon launched the EOS R and followed that up with the cheaper EOS RP full-frame mirrorless cameras, many questioned the lack of in-body image stabilization (IBIS).

At the time, Canon said that in-lens stabilization was an "optimum system", explaining that in-body stability will need to work across different lenses – with the optics in each lens moving in a different manner, a dedicated system can be difficult to achieve, Canon added. Since then, though, rumors have been circulating about a high resolution full-frame Canon mirrorless shooter that could feature sensor-based image stabilization.

A patent recently filed in Japan is fanning the whispers further, suggesting Canon has changed its mind and the rumored 83MP full-frame mirrorless camera supposedly arriving some time next year could boast an IBIS mechanism.

Camera rumors site Canon News was tipped off about the new patent, which describes in detail how in-body stabilization could be improved. Canon News explains that the Japanese camera manufacturer is "looking to create high efficiency in the movement force, and to improve the linearity of the magnetic circuit for position detection".

According to Canon News, both "are important to moving a large full-frame sensor quickly and with a high degree of accuracy".

The exploded diagram (pictured above) provided in the patent is extremely detailed, suggesting that it's not just an idea, but a technology that is ready to be put to use.

Everyone else is doing it...

This isn't the first patent filing from Canon to suggest IBIS is on the way. One filed in July this year indicated the camera maker was looking at adding sensor-based image stability to DSLRs. However, the new EOS 90D launched without in-body image stabilization in August.

IBIS isn't a new technology though: Sony has been offering in-body stabilization in some of its mirrorless cameras for some time now, including the full-frame Alpha A7 III and the APS-C Alpha A6500. In fact, it can't have been easy for Fujifilm to design an IBIS module for the massive sensor in the GFX 100, but it has been done.

Olympus and Pentax have also been offering IBIS in their mirrorless cameras for years – only Canon and Nikon, the traditional DSLR makers, have historically shied away from it. However, both the Nikon Z7 and the Z6 full-frame mirrorless cameras arrived with sensor-based stabilization, offering more to its customers than Canon.

Is IBIS such a big deal, though? The general consensus is that lens-based image stability is sufficient for most photographers, which would mean IBIS is essentially marketing fodder. Unfortunately though, of the four RF lenses that launched alongside the EOS R in 2018, only two had image stabilization.

While the range of RF lenses is improving, it's no wonder that Canon users have repeatedly felt let down in terms of features offered by the company's stable of snappers – evident from declining sales over the last year. Offering IBIS to its customers could give Canon a much-needed boost, putting it on par with the competition.