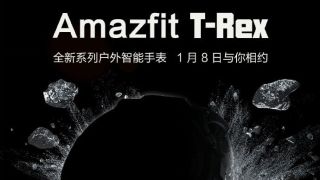 Chinese wearable manufacturer Amazfit is set to appear at CES 2020, and it will seemingly be launching at least one new smartwatch at the show.

Originally set for a January 1 launch in China, the Amazfit T-Rex release has now been pushed back according to a new teaser from the company.

Specifically, the updated teaser image above was posted to Chinese social networking site Weibo, showing the date January 8. CES 2020 will be underway by then, making that the obvious announcement venue.

A few photos of the smartwatch have previously appeared thanks to an FCC listing of the device, but the best look yet at the watch comes from a screenshot of the Amazfit app, showing the Amazfit T-Rex ready to pair.

The company has yet to reveal any of the specs or features we can expect to see, but the design looks to be rugged, with a focus on making a durable smartwatch for those who may easily damage a normal device.

The FCC certification also suggests the watch will have built-in GPS, a heart rate monitor, Bluetooth 5 technology and water resistance up to 5 ATM.

Amazfit has claimed its new Bip S smartwatch will also be debuting at CES 2020 with what the company refers to as "ultra-long battery life".

CES 2020 is set to kick off on January 7 and TechRadar will be at the show in Las Vegas to keep you informed of all the new tech you need to know about.