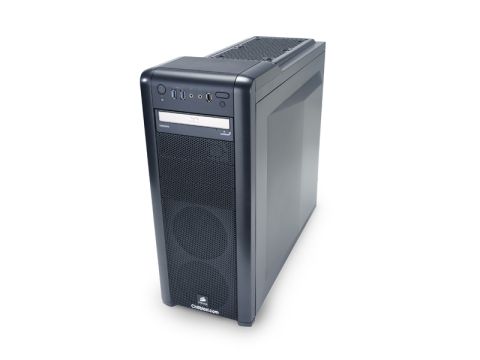 A decent gaming system, but would be better with a Radeon HD 7950 substitution

Talking about gaming PCs that cost north of £1,000 is difficult, considering the global economic meltdown. But that hardly seems to be affecting the prices that component manufacturers, and subsequently system integrators, are charging for their goods.

With the latest releases in the CPU platform and graphics card spheres, we've seen some crazy-high prices. The top-end AMD Asus Radeon HD 7970 GPU that sits inside this Chillblast Fusion Marine is a perfect example, hovering around the £500 mark on its own.

Thankfully though, Chillblast has decided that one nutsy component is enough for this gaming rig, and that's just as well considering the HD 7970 already has this machine topping the £1,000 mark.

The Intel i5 2500K CPU and Asus P8Z68-V LE motherboard combo is enough for any gaming rig in the world, so a blazing fast GPU is a smart investment - especially when Chillblast has overclocked the Intel CPU up to 4.8GHz.

At nigh-on £1,200, it's a little more than we'd want to pay for a gaming rig with an i5 in it. That said we've seen some awesome machines around the £2,000 mark, which we really did like, and the Chillblast Fusion Marine can still hold its head up high beside them.

The Intel Core i5 2500K is fast enough that it can let the AMD HD 7970 run unfettered, and it's simply the fastest single graphics card on the market right now. The Chillblast Fusion Marine beats the £1,800 CyberPower Liquid Xtreme GT, with its Nvidia GTX 580, in all our gaming tests.

The hex-core Sandy Bridge E CPU keeps it head and shoulders above the lowly quad-core i5 in CPU intensive benchmarks. But in a gaming rig you don't care how quickly your CPU can render 3D scenes - you want to know how fast the machine can throw Draugrs in Skyrim's dungeons. And the answer is it can do it pretty bloody quickly.

The i5/HD 7970 combo isn't ideal, since the AMD Radeon HD 7950 has become the gamer's choice, but this machine came to us before its release. Chillblast will be offering the Fusion Marine with an HD 7950 in the future, which will bring it closer to our idea of the dream £1,000 machine.

But this desktop PC is more than just a processor and a high-end graphics card. The clean, simple lines of the Corsair 400R chassis belie the quality of the rest of the components.

The 8GB of 1600MHz DDR3 Corsair RAM is an excellent addition, and the Smart Response Tech used to fuse the 30GB OCZ Vertex 3 SSD and 1TB HDD is an intelligent choice. This little setup alone ensures that every part of the Chillblast Fusion Marine experience is swift and pretty much seamless.

With a gaming computer, frame rates are king. The Chillblast Fusion Marine's top-GPU takes care of that, and some smart accompanying components mean that this system fits together beautifully as a whole machine.