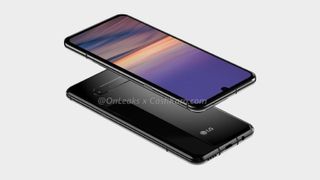 The upcoming LG G9 ThinQ flagship phone is coming and it could have four rear cameras lined up in a horizontal row, according to new leaked renders.

The renders, courtesy of CashKaro and noted leaker @OnLeaks, show a sleeker handset with less bezel than its predecessor, the LG G8. If the leaks are true, then LG’s next flagship could also switch to a teardrop notch.

The render implies a large display between 6.7 and 6.9 inches and an in-screen fingerprint sensor. Diverting from previous LG G-series flagships, the G9’s rear cameras aren’t quite flush with the back, so expect a slight camera bump.

A teardrop notch hints that LG is ditching the depth sensors that made the G8’s notch so wide – and ergo, the gesture control/vein recognition system that, while gimmicky, was an attempt at next-gen phone innovation.

Which leaves us speculating about what kind of new trick LG will give the G9 to try to compete with the forthcoming Samsung Galaxy S11 series.

One thing seems clear: this leak claims the new phone will be both notably longer and wider than its predecessor – 169.4 x 77.6 x 8.8mm, to be precise - which means it won’t fit in the Dual Screen that came with the LG G8X, countering LG’s claims that it would attempt to make future phones work with the second display.