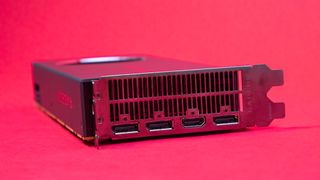 AMD has revealed some fresh details about its incoming graphics cards for this year, and it seems that the plan is to unleash a high-end next-gen GPU, alongside refreshes of current Navi products.

These revelations come from the very top, namely AMD’s chief executive, who was quizzed about a number of things in an earnings call following the company’s latest financial results for Q4 (which were very healthy indeed, with revenue up 50% year-on-year, one of the big drivers being Ryzen CPUs, unsurprisingly).

As Anandtech reports, when questioned on GPU plans for 2020, CEO Lisa Su stated that: “In 2019, we launched our new architecture in GPUs, it’s the RDNA architecture, and that was the Navi based products. You should expect that those will be refreshed in 2020 – and we’ll have a next generation RDNA architecture that will be part of our 2020 line-up.

“So we’re pretty excited about that, and we’ll talk more about that at our financial analyst day.”

The above information is, however, somewhat open to interpretation. It’s clear enough in stating that current Navi graphics cards will be refreshed this year, and that a next-gen RDNA GPU will be part of the release schedule for 2020.

The guessing begins in terms of latter presumably referring to Big Navi, the high-end graphics card which has been much-rumored of late, and is designed to take on Nvidia’s top RTX offerings.

This GPU will purportedly be built on RDNA 2 (although note that RDNA 2 isn’t mentioned by name, it’s just called next-gen – so it could potentially be RDNA+), and that will come with hardware ray tracing acceleration to go up against the RTX cards.

We definitely know that a high-end graphics card is going to arrive at some stage in 2020, as Lisa Su already made this known in no uncertain terms. From what we’ve heard on the graphics grapevine, it could be a truly monster GPU, and might be in line for a Computex 2020 launch (in June – a mid-year release has previously been rumored).

The other comment concerning current Navi-based GPUs presumably means that these will be refreshed alongside the new launch, so we will get beefed up versions of RDNA cards, as well as the fresh high-end RDNA 2 offering(s) later this year. Although we obviously have to be careful here, as that’s not exactly what Lisa Su said – just what we’re reading into it.

Given the amount of spillage going on right now about AMD’s upcoming graphics cards for 2020, with a number of comments coming from the GPU maker itself, we probably won’t have long to wait to find out – and we can guess (or perhaps hope) that a high-end launch is coming sooner rather than later this year.

AMD’s most recent shot from the hype cannon is that it intends to push out a high-end GPU to disrupt 4K gaming in a similar manner to what Ryzen did in the processor world. Although whether the firm has the financial muscle to push its GPUs as hard as its CPUs – while maintaining that momentum with processors, in order to keep that lead over Intel – is another question, of course.

Let’s hope the eventual next-gen Navi product lives up to the hype, although if it doesn’t launch sooner rather than later, it may run into much tougher competition from Nvidia’s own next-gen GPUs (which the rumor mill also expects to debut in 2020).