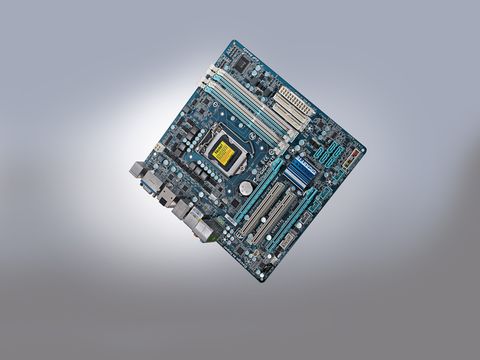 This motherboard has HDMI, DVI, VGA and DisplayPort covered

All the board you'll ever need for just £75? Not quite, but Gigabyte comes close

At-a-glance Gigabyte has nailed it with the fab, affordable, full-featured H55M UD2H motherboard. It ticks all our boxes. It may be a compact MicroATX motherboard, for example, but it still packs a pair of 16-lane PCI Express graphics ports.

Thanks to the H55 chipset, it's also about as flexible as it gets for an Intel compatible motherboard. Drop in any LGA1156 CPU and you can be sure you're getting the most out of it. That includes Intel's new Clarkdale Core i3 and Core i5 'fusion' chips. You know, the little dual-core blighters with on-package graphics.

Gigabyte has gone one better than most H55 boards by providing not just HDMI, DVI and VGA video connectivity, but also a DisplayPort socket. You could argue, of course, that Clarkdale's graphics are so ghastly that any video-out functionality is moot. But being able to boot your PC without the graphics card installed is a handy debugging tool.

Likewise, support for Intel's integrated graphics could give this board a second life as the basis of a low-power media or home cinema PC once its front line duties are done.

Even more impressive is the sheer performance on offer. A 200MHz result in our base clock contest is good enough for equal first place. But thanks to deft handling of Intel's Turbo Mode feature, the H55M UD2H beats all comers with a maximum CPU frequency of 4.2GHz. That includes even Asus' weapons-grade Maximus III Extreme, a board that comes at a near-£200 premium.

And remember, that frequency is courtesy of stock voltages and a standard cooler. Corners cut Affordability usually comes at a cost and this bargainous board is no exception.

The most notable non-attendees are USB 3.0 and SATA 6Gbps. Odds are, 18 months from now their absence will be smartly felt. If future-proofing is a major priority, you'll need to look elsewhere.

It's also worth noting that Intel has surgically removed RAID support from the H55 chipset. Specific to this board, enthusiast-friendly frills, such as hardware power switches and coolers for the VRMs are likewise absent. We're not that keen on the close proximity of the RAM slots and primary graphics, either.

We feel obliged to chalk up a minor demerit regarding ease of overclocking. Keeping memory speeds in check when cranking up the CPU clock is essential for stability. The other boards here can be configured to do that job for you. Not so with the H55M UD2H. You'll have to manually set the memory divider to a suitable level.

Oh, and it turns out that the second PCI Express x16 port is only wired for four lanes. But don't let that give you the wrong idea. At this price and with this sort of table-topping performance, Gigabyte quite literally has a winner on its hands.