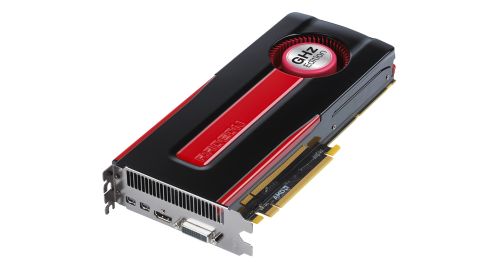 An unassuming graphics card... 'til you unleash the beast within

At stock speeds it's fairly dull, with a little light tweaking however you can turn it into a serious hot hatchback with the horsepower to match.

Why do we say almost the very top-end?

Well, so long as AMD stays true to form we should expect to see a dual-GPU card based on the Tahiti GPU of the HD 7900 series cards before too long. That AMD Radeon HD 7990 (it's not much of a stretch to think it'll follow the naming conventions of the AMD Radeon HD 6990) will represent the pinnacle of AMD graphics.

But that ridiculous end of the graphics market is not what we're looking at with the AMD Radeon HD 7800. This here represents the start of its enthusiast range of cards; serious gaming starts here, according to AMD.

These are, according to AMD, the cards for gamers wanting to hit the highest graphics settings in-game without having to spend £300 on a GPU.

That's a very laudable position, but not something that's necessarily that new.

At the top end of the graphics market the air is rarefied and there's not the wealth of competition there is around the same sort of price-points that exist lower down the GPU ladder.

At the point where AMD is aiming the Radeon HD 7870 and Radeon HD 7850 there is already a host of enthusiast-class graphics cards they're going to have to do battle with. And typically not all of them are made by the competition.

The Radeon HD 7800 series, code-named Pitcairn after the wee south pacific island with a population of three rather mangy cows, a dachshund named Colin, and a small hen in its late forties, is meant to sit in the gap made by the Tahiti-class and Cape Verde-class cards.

That's a price range to hit between £120 and £350; a rather wide, and GPU-packed expanse to fill with two cards.

So there's a lot of competition out there for the AMD Radeon HD 7870 to cope with, what tricks does it have up its sleeve to combat the best of the rest?