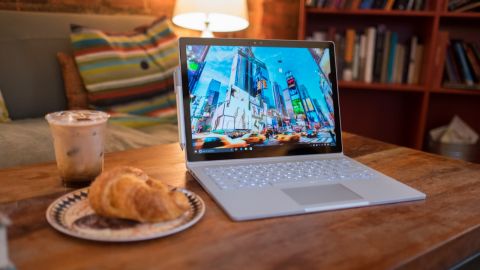 With a dedicated GPU, naturally the first tests we conducted were gaming ones. The Clipboard and its Skylake processor have more than enough power to make Hearthstone fly, even at full resolution. Plugging the display into the keyboard base unlocks even more performance from the dedicated GPU. With the discrete graphics chip in tow, the Surface Book can play Rocket League at 30 frames per second (fps) in full screen and medium settings.

For more ‘hardcore’ games, like Metal Gear Solid: the Phantom Pain, we were able to get it running between 24 and 29 fps, but only after dropping down to 1080p and practically turning off every setting. Microsoft’s first laptop won’t be replacing the best gaming PCs any time soon, but it’s surprising how well this machine gets along with only 1GB of VRAM.

Of course, all this power also makes the Surface Book a productivity beast that easily takes on task after task. Lightroom runs incredibly fast on this 13-inch laptop, thanks to the added power of the Nvidia graphics. What's more amazing is we’re able to edit photos quickly while having a browser full of 10 tabs and streaming video pushed over to a connected monitor.

Here's how the Microsoft Surface Book performed in our suite of benchmark tests:

The Surface Book has broken all sorts of benchmark speed record, thanks to its hot new Intel Skylake and Nvidia GeForce chipset. Just in terms of processing power alone, it's 301-point Cinebench score is significant jump compared to the Dell XPS 13, which ran with a last-generation Broadwell Intel Core I5 chip.

Thanks to the extra boost from the discrete graphics chip, the Surface Book also has more than double the performance for gaming. This is evidenced by its 1,868 point Fire Strike score compared to the Dell's 739-point performance.

The only figure we could draw to compare this machine to the 15-inch MacBook Pro is the GeekBench score. In the multi-core test, Microsoft's laptop finished with 6,635 points, whereas two outlets saw the 15-inch Apple's steely steed completed the test with an average of 14,258 – an unsurprising result, considering the MacBook Pro has twice the number of processor cores.

With 3,000 x 2,000 pixels under its belt, the Surface Book sits at a happy middle ground of being sharper than most other laptops (including every MacBook in existence) without the troubles that plague 4K screens. You'll never see the separation between the pixels, l because they're so tiny, and Windows 10 scales beautifully at 200%.

While most applications, including the Origin, Steam and Battle.net launcher would look tiny on a 4K screen, these windows look small, but not uncomfortably so, on the Surface Book.

We even like the 3:2 aspect ratio. The ability to read more lines of text and not have a Lightroom window that's not vertically squished together more than makes up for the thick black bars that appear when you watch movies. Microsoft fashions its displays after A4 paper, which makes the Clipboard feel like a natural device for writing and art work.

Within five minutes of handing the Surface Book over to an artistic friend, who works as a designer in the fashion industry, she was already drinking the Kool-Aid. According to her, using the Surface Pen is incredibly accurate, and the screen gives just enough to the point where it emulates the feel of painting and drawing on real paper.

Now that Microsoft has started to patent new versions of the Surface Pen, complete with haptic feedback functionality and a touch-sensitive retention clip, we’re curious how else the company plans to improve upon its winning stylus in the future. For the time being, however, we’re admittedly satisfied by the 4,096 pressure sensitivity levels of the most recent Surface Pen. Should it get better, it would only be icing on an already delicious cake.

Sadly, the speakers don't make as big of an impression and really only sound good enough for some casual listening. While they avoid the problem of being tinny, as most laptop speakers are, they also lack any depth with barely any bass. If you're looking to settle down for a movie or a quick game, you'll want to plug in a pair of headphones.

Battery life on the Surface Book is both pretty good and surprisingly disappointing. While Microsoft has promised 12 hours of continual usage and other outlets report getting even more juice out of the machine, our best time for the device was 7 hours and 39 minutes. As for the Clipboard on its own, the tablet can last for 4 hours.

While these are more than respectable numbers considering all the hardware inside the Surface Book, we honestly expected a much longer run time. The good news is this notebook recharges quickly, going from zero to 100% charge in under two hours.

This could largely be due some problems early Surface Book owners are running into. Our unit seems to be among this group of afflicted models. Just some of the major bugs include the system not starting up properly when connected to the dock and display driver failures. The latter of which cause battery life to drop dramatically by three or more hours.

Microsoft has said it is "aware of aware scenarios where Surface Book's display may deliver a display driver error and that we'll address through fixes issued via Windows Update within a few weeks after launch."

By comparison, the older generation Dell XPS 13 lasted for 7 hours and 40 minutes, while several outlets were able to stretch their usage of the most recent 15-inch MacBook Pro for an average of 9 hours and change. So again, the Surface Book's battery life is by no means terrible, but it could get a lot better with future updates.