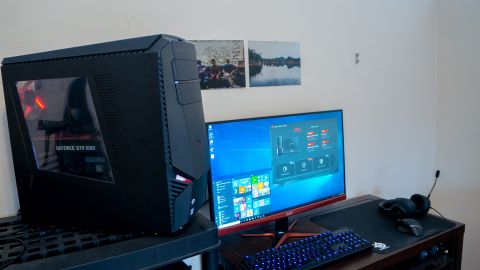 The Legion Y920T pairs great hardware with a well considered design. But, competitors have a leg up on it in affordability.

Lenovo is pressing onward with its Legion lineup of gaming machines with the latest Legion Y920T gaming tower. This is the next step for the Y9xx series, as it makes incremental improvements on the IdeaCentre Y900 of 2016 and and the Y900 of 2017.

Let’s dig in and see how Lenovo’s top-of-the-line gaming rig stacks up against the competition.

Here is the Lenovo Legion Y920 Tower configuration sent to TechRadar for review:

A slightly lower-spec version is available U.S. with half the SSD and HDD storage and a GTX 1070 8GB for a more palatable $1,799. Sadly, this model doesn’t appear to be sold by Lenovo in the UK or Australia.

The design of the Legion Y920T is nearly identical to the earlier IdeaCentre 900 models. It keeps the aggressive eyes and the jagged looking carbon fiber finish. It’s fully committed to the gamer aesthetic, but thankfully not overcommitted.

The RBG lighting of the two front eyes and the front Y logo is customizable, which means it can be made as subtle or obnoxious as desired. Sadly, the rear fan stays red, ruining any lighting scheme with shifting colors or that doesn’t involve red.

The build of the case feels great, with nothing feeling loose or like it’s made of weak materials. The side panel is a bit cloudy, which is too bad, because Lenovo’s internal layout of the system is clean. Most of the cables are fairly well hidden, so the powerful GTX 1080 can stand out. The reddish PCB of the graphics card at least will match the red aesthetic forced by the rear fan. Lenovo uses a nice matte black metal inside that feels sturdy.

Lenovo also has a handy solution for opening the case. Undoing the locking mechanism on the back and pressing the large button on top opens up the side panel without any need for screws or a screwdriver.

The case’s airflow seems to get the job done, as we never noticed hot spots even during benchmarking. The included fans work, pushing that air out through the back. They can get noisy at times, with the blower-style GTX 1080 appearing to be the main culprit behind the loudest racket. Nothing ever sounds faulty, but there are some curious coffee-maker-like sounds.

The Legion Y920T is a big boy. It ships in a huge box, and it, itself is a huge box, measuring 34 liters in volume. It won’t sit subtly on or beside a desk. And, with its size, comes weight. Hefting around a 34.4 pound case from LAN party to LAN party won’t be a blast, but the handle on top does help.

Lenovo claims that this rig is easy to upgrade, and the tool-less panel is a good start. But, from the looks of it, some upgrades will be harder than others.

Our rig has two empty RAM slots that will be easy to fill. There’s enough room to get a bigger CPU cooler, though some heat sinks near the CPU may get in the way. The top of the case is a bit busy, so a radiator seems out of the question.

A second PCIe 16x slot is available below the graphics card, making a SLI upgrade feasible. However, actually swapping out the current graphics card is a tad more tricky than it should be. It’s held in with a bracket system, and a special cable extends one DisplayPort through the case to provide a front panel HDMI port. It can be undone, but it’s not quite as plug-and-play as other setups.

While 2TB of HDD storage is a substantial amount, getting more room for games is important, and perhaps adding in some more solid state storage to make up for the lack of it would be nice. However, the motherboard doesn’t provide very easy access to the SATA ports, as they’re mostly blocked by the graphics card.

Perhaps worst of all is the Z270 chipset. The i7-7700K is no slouch, and still boasts great single-core performance and some nice overclocking headroom, but the Legion Y920T’s Z270 motherboard means there’s no simple upgrade to the already available Coffee Lake CPUs.

Here’s how the Lenovo Legion Y920 Tower performed in our suite of benchmark tests:

There’s no doubt about it, the Legion Y920T gets the job done, and it does it quick. It boots in a flash, like blink and you’ll miss it.  The fast CPU, RAM and SSD all combine for smooth, zippy performance while browsing the web, watching videos and booting up programs. It’s going to struggle with nothing but the most demanding applications.

As a gaming computer, it holds its own. It performs well in benchmarks (below), and it earns its keep running Middle Earth: Shadow of War, PUBG and Rainbow Six: Siege on a 1440p 144Hz monitor with mostly Ultra settings. Results vary somewhat, but it consistently spits out highly playable frame rates in the ballpark of 70 to 100.

Even the brand new Far Cry 5 runs at a smooth, stutter-free 70fps most of the time at 1440p on maxed out settings and averaging 73FPS in a benchmark.

Thermal throttling never appears to be an issue during our time playing, as the frames stay consistent over hours-long sessions.

The benchmarks show some interesting results, as the power on offer by CPU of this rig seems gets a small leg up on the Alienware Aurora R7 and Corsair One Elite in few places, despite those two having some beefier internals and liquid-cooling.

While the 1080 Ti in those two computers handily beats the Legion Y920T in GPU-intensive benchmarks, the CPU fairs well against the competition. Its i7-7700K helps it beat the Corsair One Elite’s i7-8700K and even the Aurora R6’s i7-7700K in GeekBench’s single-core performance and Cinebench’s graphics test, also topping the R6 in GeekBench’s multi-core test.

One of the key changes to the Legion Y920T compared to its predecessors is how it makes VR more convenient. It’s already a mess of cables getting the Oculus Rift running. So many USB ports are needed, and the headset has to plug into an HDMI port while the computer is plugged into a monitor that might also need an HDMI port. If some or all those ports are behind the computer, it can be a real hassle.

The Legion Y920T solves all of that with no fuss. There are multiple USB ports at the front of the case, and a solitary HDMI port wired through a  DisplayPort plug on the video card, so everything an Oculus gamer needs to plug in can go right into the front of the case, even if they have a three sensors to set up.

Gamers might fear that pre-built PCs are all expensive with cheap – and, often proprietary – parts slapped into a box, installed with Windows, and called good enough when they’re nothing better than a noob could assemble. That’s not the case here.

Lenovo has done a fair job putting together the Legion Y920T. The build quality is sturdy with a touch of sex appeal, and the components inside perform highly. For VR, Lenovo has solved some of the tedious parts of setting up.

While it’s possible to build a similarly spec’d computer for a bit cheaper, we still have to consider the difficulty of finding high-end graphics cards at proper retail pricing. Going the DIY route also requires building a well balanced machine with thoughtful cable management, good airflow and the lack of a warranty should you make a mistake.

The extra amount we’d have to spend on the pre-built Lenovo seems easily worth it. However, we’re likely to hop on over to Dell for the GTX 1080 Ti in the Alienware rig and get even more frames for our dollar.