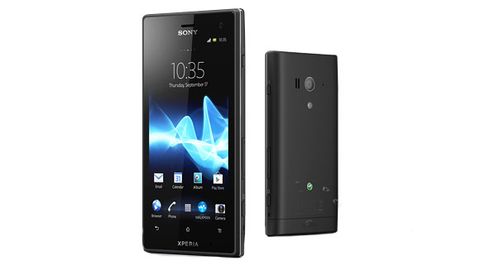 Did your last phone end up in a watery grave?

Having tacked most of the letters in the alphabet to its Xperia moniker, Sony has certainly been busy flooding smartphone stores with its mobile wares. There is the Xperia S, the P and U; there's an Xperia E, the T, the TX and the recently announced Xperia Z.

Each of these models is an incrementally different twist on the same central concept. The Xperia range has a distinct look and often feel similar to hold with Sony opting for the same soft-touch plastic chassis across the Xperia family.

With its water-proof promise, the Acro S does offer something a little different from most of its stable-mates. But this extra security comes at the cost of making the handset noticeably thicker and slightly heavier than you might expect a smartphone to be in 2013.

The external ports on the handset needs to be sealed too, which is pain for those of us who bite our nails with nervous fervour and then need to pick at the flap on the USB port before charging the phone each night.

On the left side of the handset you'll find two unsightly copper contacts set into the frame of the phone. These certainly break the aesthetic flow of the phone's design. But what are they for?

Generously, Sony include a desk dock for the Acro S in the sales kit. The contacts on the phone connect with the dock when the phone is inserted to charge the handset and for data transfers over USB. We love this as a bonus in the box, but couldn't the dock have connected to the phone's USB port and kept its sleek black frame unspoiled?

The 4.3-inch screen on the Acro S is a blast from the past, with most new handsets in this price range sporting 4.5-inch displays, or larger. Not that this smaller screen detracts from the user experience, in fact many will prefer this. The LED-backlit LCD in this phone does a great job of delivering colourful pictures, with a good viewing angle and no discernible air-gap between the glass and the panel. The screen also makes use of Sony's wet finger touchscreen tech, so that you can use the phone immediately after dropping it in the loo.

We have to say, that it's not a great looking phone. This design is functional; the soft-touch plastic gives grip, and the buttons are well-spaced, but there is nothing eye-catching or exciting about it either. No tapering on the edges, no stainless steel trim, no dashes of colour to highlight a feature. It's just a black rectangle, and a chunky one at that.