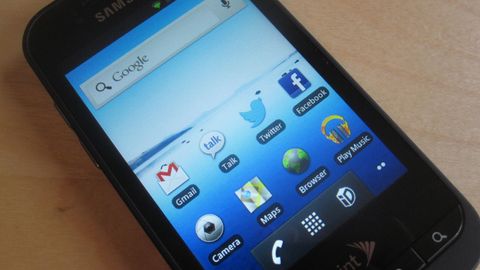 The battery life is perhaps the phone's one saving grace. After heavy use, which was a combination of making voice calls, surfing the web, watching videos, downloading apps, and taking pictures, the Conquer did a reasonable job of meeting the advertised six hours by a little more than five. Which, given the variety and length of the activities, is impressive.

At the end of the day, what we have is a device for those on a budget, and one that's clearly showing its age in today's marketplace, yet still coming through with some bang for your buck.

Right up front is the Conquer's compact size, and relatively light weight. Which, when coupled with the textured back, results in a device that's simply nice to hold and fits in your pocket with ease.

But inside that teeny tiny package is a speed demon. The 4G surf and download speeds is mighty impressive for a device that's supposed to be for super affordable. Plus the phone as a whole is very snappy, which is nice when compared to other budget devices.

Those expecting to be bombarded with a mountain of bloatware for the carrier can breath a sigh of relief. There are a few apps to be sure, but not nearly as many as one would expect, especially for a device that's relatively inexpensive.

The end result is a more or less stock Android experience. The biggest benefit is the camera app. With some pretty looking, but ultimately obtrusive custom UI getting in the way, you're left with an app that gives you a surprising amount of options, to make those pictures the very best that they can be.

Unfortunately, a cost-conscious handset is going to make concessions. The display takes one of the biggest hits for the team, with a touchscreen that is serviceable, but is also undeniably small. The low resolution prevents users from enjoying HD media, and the small surface space makes typing a bit of a pain.

The audio jack is also awkwardly placed, so trying to listen to headphones while holding the device by both sides horizontally, like when playing a game, is just a pain. Making matters worse is how your headphones will constantly slip out, due to a less than snug connection.

The worst part is how headphones are a necessity. Because the speaker quality on the back of the phone is rather poor. And while we appreciate a mostly stock Android experience, it's yesterday's Android experience. So some of today's hottest apps, such as Google Chrome, will not be accessible.

Despite how feature rich the camera app might be, and the control options that are provided up front, the 3.2 megapixel camera will be the reason why most images, despite your best attempts, will remain washed out and dull.

If you want to pay next to nothing for a 4G smartphone, but want a little something after-all, the Samsung Conquer 4G (Sprint) should be considered. You certainly have other options out there, and they should be considered as well. But it's combination of price, profile, power, and ease of use is a force to be reckoned with.

Just be sure that you know what you'll be getting. So long as you don't mind being locked out of some of today and tomorrow's apps, can handle a less than spiffy display, are able to tolerate less than perfect looking pictures, and figure out a way to hold the phone that will prevent the headphones from slipping out, you'll be fine.