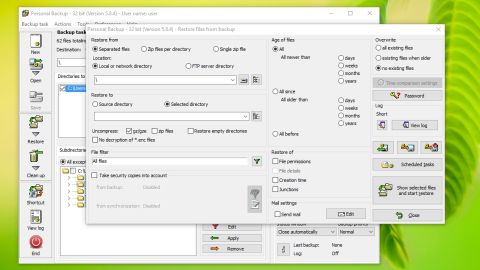 There’s a rule of thumb that applies to free apps: if a powerful feature is available, it’s usually only available in a paid-for version of the product. Not here.

Personal Backup includes some very powerful features indeed including PbStarter, which stores backups under a separate user account to protect against ransomware; TbBackup for saving and restoring Thunderbird email files; support for Windows’ advanced Volume Shadow Copies feature; and support for a wide range of destinations including networked drives and FTP servers.

Personal Backup can manage multiple, unlimited backup sets, run automatically – daily, weekly or in response to specific events such as logging on or shutting down – or on demand. It can also back up very specific things, such as only files with specific attributes such as age, size and other options. You can also encrypt backups to keep them secure, create desktop shortcuts for one-click backups; and compress backups to save storage space. Pretty much the only thing it doesn’t do is make full system images.

If you only want to back up a few Word documents and cameraphone snaps then Personal Backup is probably overkill, but if you need total control, total flexibility and total peace of mind then this really needs to be on your software shortlist.

There’s no disguising the fact that Personal Backup lacks some of the user-friendly polish of more mainstream products, but it’s still pretty good for most users.

There’s a simplified wizard to take you step by step through the process of creating your backups, and more experienced or adventurous users get stacks of manual options to fiddle with. Once you’ve selected the data you’re prompted to say where it’s going, whether to compress it and whether to encrypt it so that  it can’t be decoded if it falls into the wrong hands. From there, it’s just a matter of saying when the backups should run.