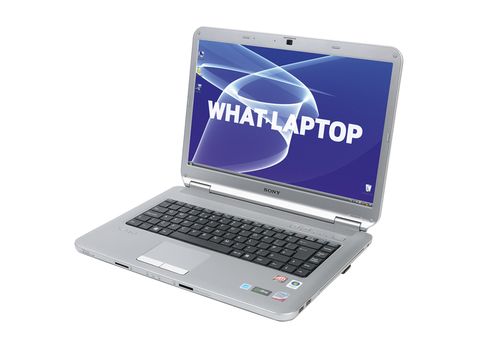 Less demanding users will find this a great starter laptop

Sony laptops have always come with a great brand identity and until recently have been some of the most expensive machines on the market.

However, the Sony VAIO VGN-NS20Z/S (£609 inc. VAT) bucks this trend by being an affordable and highly usable entry-level machine.

The look of the machine is rather basic, with a grey and silver design that is functional rather than design led. The chassis weighs 2.8kg and comes with a 15.4-inch Super-TFT screen.

Sony is pitching this machine as a media laptop, so you'll find a rather mainstream graphics sub-system in place. This is great for basic gaming, but also means you'll be able to edit video as well as photos with relative ease.

While it has a glossy panel, we found contrast and image brightness wasn't the best, with some colours looking rather washed out. That said, the whites appeared crisp, so word processing and web pages look sharp.

The screen has a rather narrow viewing angle, which is fine when you're sitting straight on to the machine, but makes sharing it with others a little more awkward.

This is a reasonably slim laptop, so can be packed away in a carry case with ease. Under test conditions, we found the battery lasted for 214 minutes, which is satisfactory for a laptop of this size.

The keyboard sits in the middle of the chassis and uses Sony's now standard square key design. This adds plenty of space around each key and also adds rigidity when typing.

We found the keys had a rather soft stroke, so you need to press quite forcefully to respond, making it less than ideal for touch-typists, but average users will find it more than usable.

With 4096MB of memory, the VAIO loads and runs smoothly, which is a smart move on Sony's part, as the use of the Intel Core 2 Duo T6400 is a rather basic choice. We found performance to be reasonable and you'll certainly be able to run standard applications with ease.

When it comes to features, you'll find a rather standard array of tools. The webcam above the screen is fixed, but image quality was acceptable. The built-in optical drive is a standard DVD rewriter, so you'll be able to back up the 300GB hard drive to disc if necessary. Sony has pre-installed a wide array of multimedia tools and you'll even find a button marked AV mode, which launches Sony's movie and music software.

The Sony VAIO VGN-NS20Z/S is a reasonable entry-level laptop that will suit students or those with basic needs. The chassis is tough and, while the keyboard proved a little soft for regular use, the keys made it still more than usable.