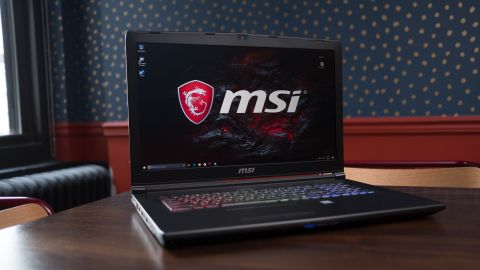 With smooth graphics and high performance, the Leopard Pro makes gaming look good both in and out of VR – just be sure to bring headphones.

Perhaps one of the greatest benefits of the supposed VR-era is the increase in affordable high-performance technology for gaming. This being the case, the 17-inch MSI GP72VRX Leopard Pro packs plenty of gaming power for a mid-range gaming PC. The notebook represents a significant value even if you have little interest in taking advantage of its VR capabilities.

However, it sports a suite of name brand components inside, such as a SteelSeries gaming keyboard, 4-position surround sound powered by Dynaudio, and a Killer Gaming Networks Ethernet card to reduce latency during online games. All of it is topped with an Nvidia GeForce GTX 1060 GPU backing a 120Hz, 1,920 x 1,080 FHD display for liquid smooth graphical performance. Other components include a 2.8GHz Intel Core i7 CPU, 16GB of RAM and a 512GB NVMe SSD.

You might not always be able to push your game settings to ultra, but you can enjoy all the still-beautiful mid-to-high settings most games currently have to offer.

Here is the MSI GP72VRX Leopard Pro configuration sent to TechRadar for review:

You can pick up an MSI GP72VRX Leopard Pro for around $1,399 (about £1,090, AU$1,880) depending on the configuration, which represents a significant value when compared to some similar systems.

The Gigabyte’s smaller 15-inch screen supports a higher QHD (3,840 x 2,160) resolution, but that might not be enough to balance out the significant price difference.

However, this 15-inch gaming notebook would have an Intel i5 processor, an Nvidia GTX 1050 Ti video card, 8GB of memory and a 256GB SSD. In other words, the savings get you quite a downgrade.

At a glance, the GP72VRX Leopard Pro doesn’t stand out among other MSI gaming notebooks. It sports MSI’s signature minimalistic black aluminum chassis, shaped to look like the hood of a sports car, decorated with a backlit dragon shield logo. However, the understated appearance works well for MSI, because it’s what’s under the hood that counts.

Players are greeted with the multicolored backlighting of the SteelSeries-designed gaming keyboard, accented by a rather large wrist rest area underneath, and two hard buttons below the touchpad. Although the keyboard is ideal for first-person shooters, like Overwatch, the entire top row of keys are half-sized, and all the keys are positioned very closely together.

It can take some getting used to unless you’re already familiar with SteelSeries’ design because the layout could lead to higher typo rates when talking in chat or performing other everyday tasks, like web browsing or email.

Everything from the keyboard lighting to overclocking and fan speeds can be easily managed using the MSI Dragon Center, an application that can be launched at the push of a dedicated key on the upper right side. Next to it is a separate key that forces the cooling fans to run at max speed indefinitely.

Although they aren’t the loudest fans we’ve ever heard, the noise is very noticeable even on automatic mode. They kick in very quickly during gaming sessions, and their sound may interfere with the enjoyment of the otherwise superb 4-point surround sound system. Even with the fans going at full blast, we can feel a small amount of warmth coming through the keyboard.

Generally speaking, the mid-range notebook weighs almost 6 pounds (2.7kg), which is about expected for a notebook of its size, but we hardly feel it when carrying it around. The configuration we tested is lighter than others because it doesn’t include a spinning drive, thereby reducing its weight to 5.5 pounds (2.49 kg) with a DVD-ROM drive.

However, the weight reduction comes with a big trade-off. A single 512GB SSD means lower weight and lightning fast boot and load times, but it also means that you can’t install more than a handful of high-end games onto the system. Together, Overwatch, Mass Effect: Andromeda and Grand Theft Auto V ate up about 126GB, which is about one-quarter of the SSD. That doesn’t even account for for the space needed for Windows 10, other apps, and downloading game installers and updates.

This issue is compounded by how the SSD comes partitioned into two halves, further limiting what you can install without tweaking the settings.

A need for speed

Given its hardware and features, it’s clear that the MSI GP72VRX Leopard Pro is designed with gaming specifically in mind, especially first-person shooters. Although it does have the power to support virtual reality headsets, such as the Oculus Rift of HTC Vive, it seems like an incidental effect of the system’s overall capabilities.

What’s more impressive to those of us who decide to stay in actual reality is the 120Hz screen, which has excellent left and right viewing angles.

The colors start to look washed out when the display is tilted back too far, which is a problem that presents itself when watching videos while the notebook is on your lap, but it is an otherwise slick and quite bright screen.