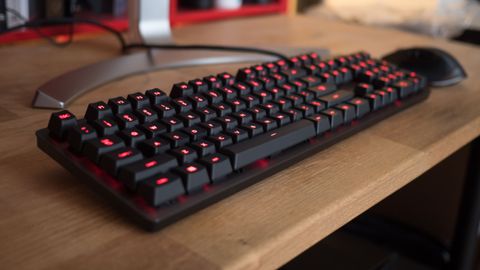 The Logitech G413 Carbon is one of the best and most inexpensive gaming keyboards on the market; however, in some small ways, it fails to meet the high bar Logitech has set for itself.

While RGB lighting and dedicated macro keys are all the rage among the best gaming keyboards, these bells and whistles cost money. Between the Roccat Suora and the HyperX Alloy FPS, it’s clear that there’s a demand for affordable gaming keyboards with simple, no-frills design and no gimmicks.

That’s where the Logitech G413, the latest gaming keyboard from Logitech comes in. It abandons the superfluous media and macro keys, along with the customizable RGB backlighting system, resulting in a frameless design and a full set of Logitech’s own Romer G switches.

Compared to most gaming keyboards or even most traditional keyboards, the Logitech G413 might look a little naked. Without a traditional plastic case, you can see the keyboard’s underlying base plate in all its glory.

The lack of an external shell doesn’t affect the rigidity of the Logitech G413 Carbon. You’ll be stumped if you try to bend or even find any weak points on this keyboard, thanks to its solid, aluminum-magnesium alloy plate. Even the plastic underside of the Logitech G413 carbon feels tough, thanks to a set of diagonally molded lines, which adds to its rigidity, while elevating it slightly above a basic, plastic base.

The only thing some users might not love is how the key caps basically hover right above the base board without any protection on the sides. We personally love the simpler design, and cleanup is easier too.

Since Logitech introduced the ostentatious G910 Orion Spark, the company’s keyboards have grown progressively thinner and more sophisticated. The Logitech G413 feels like the last major step in that direction with a completely bare frame that measures just a centimeter thick.

Unlike all of Logitech’s other keyboards, this one doesn’t include any dedicated media buttons. Sure, users can just hit the function button to toggle on shortcuts attached to the F-keys, but it seems like an odd omission when they’re available on the even-lower-priced $69 (£59, AU$99) G213 Prodigy Gaming keyboard.

Likewise, while we appreciate the USB passthrough, it’s only USB 2.0, which comes with slower data transfer speeds.

Still, this level of connectivity is comparable to the Corsair Strafe and a step up from the sole charging port you find on the HyperX Alloy FPS. It also does a fine job of supporting wireless peripherals, like the Logitech G900 Chaos Spectrum, and comes in handy for charging devices.

The bottom of the keyboard has a cable pathway you can use to route your headphone cable – a feature we’ve only previously seen on the Corsair K95 RGB Platinum. At the same time, an additional “U-shaped” channel acts as an anchor point for your wired gaming mouse.

Rather than going with membrane keys or Cherry MX switches like Logitech’s last few budget keyboard offerings, the G413 comes with a full complement of Romer-G switches. If you haven’t had the chance to use them yourself, the only thing you need to know is they’re responsive and relatively silent mechanical switches.

There’s a strong tactile bump when you hit the bottom of the 2.5mm of key travel on the Romer-G mechanisms. Despite the long actuation distance, we got into to cover faster and more reliably than with other keyboards. This is due to Logitech nailing down response times to a science.

These Romer-G switches should also last you a while, as they’re rated for 70 million actuations. Logitech also includes a set of 12 faceted key caps that you can use to replace the WASD and first five number keys, plus a few others. They’re a welcome touch for differentiating the gaming-specific keys from the rest of the board.

Logitech has introduced an inexpensive and gorgeous, fully mechanical gaming keyboard that’s well worth your attention. It’s the most affordable frameless option on the market, beating out HyperX Alloy FPS and Roccat Suora in price and responsiveness.

However, the slow USB 2.0 passthrough and lack of dedicated media keys are two compromises you’ll have to accept with that low price. The Logitech G413 feels like it makes total sense compared to its rivals. That said, when you stack it up against Logitech’s other offerings, it seems like an odd step down from the company’s own entry-level option.

Regardless, the G413 sits firmly among the best sub-$100 gaming keyboards you can buy today.