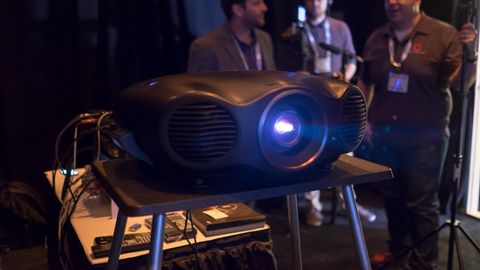 The first 4K projector from Epson fully renders stunning Ultra HD with unsurpassed fidelity, but at a hefty price.

4K TV will, without a doubt, be the next revolution in television technology. Entering its sophomore years, the Ultra HD fad is finally hitting its stride with affordable sets that are more accessible to the everyman. At the same time, options targeted for home theater enthusiasts are in large supply with massive and even curved televisions. Now, we have a kickass 4K projector to gawk at.

At CE Week 2015 in New York CIty, Epson showcased its flagship 4K projector, the PowerLite Pro Cinema LS10000 (otherwise known as the EH-LS10000 in the UK). By far, the key takeaway from this projector is that it uses freaking lasers in place of traditional lamps to render an image.

Aside from the coolness factor, going with concentrated light rays also means this projector starts up dramatically faster. Plus you won't have to worry about burnt out lamps or it being excessively loud.

The Epson PowerLite Pro Cinema LS10000 is massive and bulbous in proportion. Measuring 22-inches square and weighing 40 pounds, this projector looks almost like looks like an alien drone straight out of a sci-fi movie with its single lens and two large air intakes on the sides. It doesn't help the rest of the projector looks as if it was streamlined with rounded curves all around for flight.

Around back, you'll find a removable rear cover with a radial-pattern grill, which you can pull off to reveal the ports. The projector has on tap a set of component ports, RGB PC input, two slots for HDMI cables, Ethernet, two remote triggers, a RS-232 serial remote port and lastly, a microUSB port for software upgrades only.

While 4K television is still a nascent media format that's barely hit homes worldwide, it's already set a new high bar for picture quality. Ultra HD TV sets have proven to not only look sharper, but also produce a more vivid and lifelike picture with improved color and contrast.

To my pleasant surprise, the Pro Cinema LS10000 was able to produce an equally pleasing picture with perfect clarity despite having to beam the picture through the air for several feet. What's more, colors were bright and despite beaming light across the room. The contrast also looked great, with clearly defined grays fading into deep blacks.

The demo unit was setup in a fairly ideal situation with a dark room and a 65-inch silvered screen standing approximately a yard and a half away. An Epson representative also explained that the projector could also be positioned further back and potentially produce a picture that's 200-inches in size.

The projector is rated to produce 1,500 lumens of light, which should be plenty bright to play a movie even in a sunlit room. But in most cases you'll want to set it up in a theater room with blackout window curtains to get the best cinema experience.

Let's talk more about the best feature of the Pro Cinema LS10000: frickin' lasers, as Doctor Evil would say. The laser engine is one of the most unique characteristics of this projector, whereas most units use lamps that burn out after roughly 3,000 hours of usage.

The LS1000 laser engine uses two blue lasers – one of which is split into a green and red light – to produce a full picture.

Epson claims the device will last well beyond the lifespan of a projector lamp, with between 17,000 and 30,000 hours of usage (depending on whether it's set to in High or ECO power consumption modes). Most lamp-powered projectors also have to heat up for up to two-minutes before you can start watching media. The Pro Cinema LS10000 will kick into gear in just 26 seconds.

The Epson PowerLite Pro Cinema LS10000 produces a stunning 4K image that rivals some of the best televisions I've ever set my eyes on, including LG's OLED 4K TV. But with a price tag of $7,999 or £5,999 (about AU$10,458), this is a home entertainment device you'll only find in the most outlandish home theater setups.