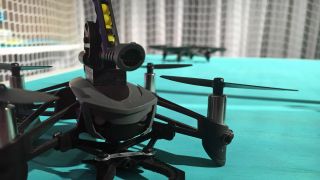 Parrot is one of the biggest names in drone, and it's about to take its quadcopters in some interesting new directions, both figuratively and literally.

At an event in London this week, hidden away in a corner, we spied a couple of previously unseen Parrot concept drones that will be released later this year.

Our favorite of the two is the Parrot Mambo, which comes with an attachable gun that can fire small pellets that look like BB gun bullets.

There's also an optional claw that can be fixed to the front and used to pick up small objects.

This will mark the first time Parrot has offered proper accessories for its drones. We're told that the gun and claw will be packaged with the Mambo when it debuts, but can be attached to other future drones that come with accessory ports.

You'll fly the Mambo using your smartphone, where you'll be able to control both the gun (by tapping a small green icon on the screen) and the claw.

Just note that the design of the drone might change between now and launch; this is an early production model.

Next up is the Swing (if you haven't worked it out yet, Parrot likes to name its drones after dance styles. See also: Bebop).

The Swing is currently held together with a lot of polystyrene - again, an early model - but has a unique two-style flight mode.

The Swing can hover like your average quadcopter, but can also be switched into a glide mode, which is better suited for faster outdoor flying. The Swing will also come packaged with a proper controller, unlike the Mambo.

We weren't able to get even a vague price for either of these drones, and it's safe to say we probably won't hear anything more official from Parrot until a bit later in the year.

Still, we're already thinking of a hundred ways of using the Mambo to pester our loved ones.