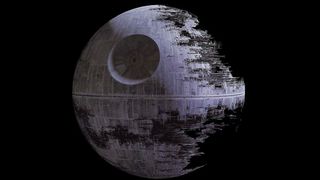 The US government may have refused to build a Death Star, but that doesn't mean the project is dead in the water. One enterprising Star Wars fan has taken to Kickstarter to seek funding for a crowdsourced planet-destroyer. And despite making it clear it's a joke, he's raised more than £50,000 in just over a day.

Costs will be kept down by using open source hardware and software, according to the Kickstarter page. Although if you're building something capable of destroying words, we reckon proprietary is the way to go.

Seeing as the US has turned down the opportunity to get involved, we'd join calls to have the Death Star manufactured in the project founder's native Leicestershire (conveniently also home to the National Space Centre). Well the Death Star was populated mostly by British character actors in the films.

Fancy chipping in? £1 gets you thanks and "the knowledge that we're one step towards a safer planet". Pledge £10 or more and you can have "your name etched onto the underneath of one of the MSE-6-series repair droids used on the finished station".

Maybe they know something we don't.

In other Star Wars news, Disney's CEO Bob Iger has confirmed some spin-off movies to join J. J. Abrams' next full instalment in the series. The spin-offs will focus on more minor characters, with Yoda rumoured to be the star of one, though Iger wouldn't be drawn on any more details.