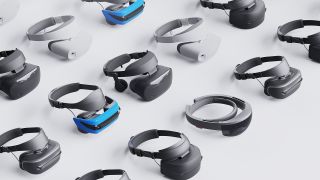 [Update: Microsoft has given official comment, which we've added to the article below – but there's still no word on whether these disappearing headsets will be returning to the store.]

Microsoft may be having a change of heart when it comes to its range of Windows Mixed Reality headsets – if the models stocked on its own website is anything to go by.

As spotted by RoadtoVR, Microsoft has culled most of the Mixed Reality headsets ranges previously on its US store. The only remaining model on sale is the Samsung HMD Odyssey+, while the Lenovo Explorer and Asus Windows Mixed Reality headsets are both listed as out of stock. The UK site only has an HP model still listed.

While that doesn't clear up whether the 'out of stock' headsets are returning or gone for good, it does look like these models are disappearing elsewhere too. The original HMD Odyssey (without the '+') is no longer available on Samsung's own site, while various MR headsets on Amazon US appear to be very close to running out of stock.

RoadtoVR notes that there could be a component shortage causing manufacturing delays for the ranges of headsets, though it's very possible that some models are simply being discontinued after tepid sales results.

The move comes several months after Microsoft decided to stop paying commissions on Mixed Reality headsets sold through its store, removing a financial incentive for partnered manufacturers such as Samsung, Dell, Asus, HP, and Lenovo.

Microsoft had also recently closed one of its Mixed Reality studios in Berlin (via Twitter), appearing to scale down its operations in the sector. At the time, Microsoft sent out an email saying that “With this reclassification, we will focus our investment activities on Surface and Xbox products rather than on the following product categories.” With a massive Xbox Scarlett console release on the way, we're not exactly surprised.

It's likely that the Mixed Reality range simply wasn't selling well enough for Microsoft to continue investing in the technology. In a market dominated by the HTC Vive and Oculus Rift for VR headsets, and Microsoft's own Hololens AR headset getting an upgrade to the Hololens 2, it may be that the mixed reality headsets were simply getting lost in the middle.

With so many manufacturers competing for what's still a relatively narrow market, the removal of some players was probably inevitable – though we'll update you if Microsoft comments on the situation.