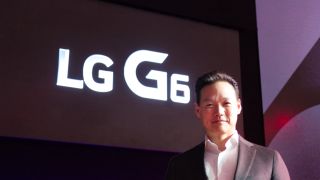 Just reading through the comments on our hands-on video review of the phone will tell the story immediately. I won’t spoil it for you, but here’s a snippet: “WTF LG?!“

Being the large global manufacturer that it is, LG has to delicately balance the feature set of each new phone as to release something that pleases people the world over. But of course, that’s impossible. Or is it?

I chatted with Frank Lee of LG Electronics to ask the very question of why the company decided to include or omit these sought after features from its G6 in certain regions.

When asked about how LG responds to consumer disappointment, Mr. Lee spoke candidly.

“We have a large fanbase that’s probably disappointed. They probably saw it [the LG G6 unveiling] and [pauses].”

It’s not just the consumers, it’s the press, too. At TechRadar, we have editors across the globe. When the V20 released, it was only me and my US colleagues that got to handle the phone, while our UK colleagues and many others got the cold shoulder.

Not being served in equal measure when it comes to a smartphone release is a baffling feeling. But Lee assures me that there’s a reason for the madness, even if it hasn’t made itself visible yet.

“We looked at each of the different regions and generally, we’re seeing parts of Europe and Asia - there’s a higher appreciation for audio. And that’s not to say that Americans don't, my goodness.

“But in this transition year, at least in the American market[…]we’re giving you wireless charging to lessen the impact from changing to a built-in battery. Wireless charging was a strategic play for us to not disappoint our fan base.”

The funny thing is, I guess that I’m the exception as an American in that I’d much rather have a quad DAC than wireless charging. To that end, I’m certain that many around the world will be perfectly content with the feature set of the LG G6 and worry not about what’s missing.

But, there will always be a vocal party and without them, companies wouldn’t stay on their proverbial toes when it comes to future releases.

“We’ll continue to learn and get to the point where, at the second half of the year, we will have locked-in what next year will look like. I think you’ll see a lot of those learnings expressed again.

“It could very well be that we’ll be talking in two months and I’ll be telling you that we’ve learned something.”