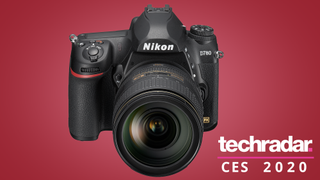 If you thought DSLRs were about as relevant as candybar phones, the new Nikon D780 is here to try and change your mind – it’s a full-frame DSLR that packs in some of the latest mirrorless camera tech.

The successor to the five-year-old Nikon D750, it’s designed to be the full-frame equivalent to the Nikon Z6 for those who prefer the optical viewfinders, handling and battery lives of DSLRs.

So what’s changed from the D750? Not a vast amount considering it’s been five years since that model, but there are three main differences. While the viewfinder-based autofocus is the same 51-point system as before, switch to the rear screen’s Live View and you now get 273-point on-sensor phase detect autofocus, complete with Eye Detect AF. Impressively, this is the same AF system as the one in the Nikon Z6.

The second big boost for the Nikon D780 comes to its continuous shooting speeds. Using the mechanical shutter, it can now shoot at a decent 7fps with AF/AE tracking, but there’s also now also a 12fps silent mode in Live View with tracking too. If you’re shooting super-speedy objects, there’s also a 30fps mode, although this only produces 8MP files and doesn’t include autofocus.

A DSLR with mirrorless flourishes

The final big change on the Nikon D780 is its video performance – it can now shoot 4K at 30fps using the full width of the sensor, and has a Full HD 120fps mode for super slo-mos.

Otherwise, the D780 will be pretty familiar to anyone who’s used the D750, and that’s really the idea. Nikon says it’s aimed at those who are happy with the handling and lenses of their existing DSLR, but want some of the Live View autofocus advantages seen on mirrorless cameras.

This means that, for DSLR fans who don’t need the latest autofocus or video performance, it’ll be well worth keeping an eye on the Nikon D750’s prices in the near future.