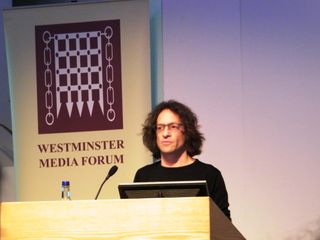 Rose - looking to apps as the future of TV

Former iPlayer and YouView head Anthony Rose reckons that the EPG is ready for reinvention and that social recommendations will pave the way for finding content to watch on your TV.

Speaking at the Westminster Media Forum, with TechRadar in attendance, Rose explained how his new app Zeebox was all about harnessing the power of 'social', which uses all manner of cues to link the app with the programmes you are watching on television – whether this is helping you buy the song you have just heard on a show or being the place you chat about the programme you are watching.

Rose is no stranger to trying to figure out how to meld the web and television. He was pivotal in the success of the iPlayer and up until recently was in charge of bringing the concept of YouView – essentially a broadcaster-friendly IPTV aggregator for the masses – to market.

But it is Zeebox and the whole idea of second-screen interaction that he is trying to push now and this is what he believes is key to how we will discover and interact with television content in the future.

"The EPG is going to get reinvented. The perfect way of finding content will be a blend of ideas," Rose explained.

"As we move to a world with unlimited content, it becomes more complicated. People are going to need someone to take this content and put it on a plate for them."

Rose's ideal idea of an EPG is one that doesn't just record things and offer up on-demand content but actually guides you through the myriad show options available.

This is something Virgin has tried admirably with its link-up with TiVo but Rose's vision is not focused so much on flagging content that's already been shown but reinvigorating live television.

"Live TV is not dead. When we started Zeebox, we were looking to see what we can do as a new venture and we found TV viewing is going up," Rose explained.

"85 per cent of TV is still live, but people are becoming more frustrated. It is because TV hasn't kept up with other devices.

"What we found is that people are beginning to self-provide. They are tweeting, Facebooking, buying things online. But there is a lot of friction involved, so we though it would be good to have a companion app to do this."

Although it is Virgin which seems to be closer to Rose's TV ideal, it was recently announced that Sky had taken a 10 per cent share in Zeebox – essentially meaning it can use the technology but Rose can still take the app and market it to other companies.

Not that we will see any of Zeebox's technology in Sky's physical EPG, as Rose sees Zeebox as a 'social EPG' that resides on a second screen, noting that there's nothing smart about the connected TVs out at the moment.

In a slight swipe at the current trend towards connected tellies, he explained: "We used to buy a TV and it played channels, it had no editorial input. The role of the TV manufacturer was to make a dial that changed channels.

"Manufacturers don't make money from live channels so they are trying to push you to the App Store, a hub which chooses you what to watch – now the manufacturer becomes tastemaker.

"Apple and Google are trying to get into this but I believe that the second screen is the tastemaker; you can be engaged with the recommendations of friends.

"It takes the decision away from the TV."

Zeebox is out now for iOS devices, with an Android version to be released soon.