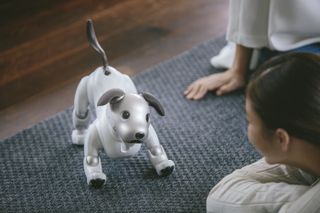 Whether you’re a golden retriever fanatic, a pug admirer, or a chihuahua enthusiast, you have to admit that being a dog lover can be a little frustrating at times. As much as we adore our canine companions, they wreak havoc on our homes, shedding fur, chewing slippers, and having ‘accidents’ on our freshly vacuumed carpets.

Well, Sony may have the answer to mess-free dog companionship with their endearing little robot puppy, Aibo, which is now available to buy in the US for the first time. The limited ‘First Litter Edition’ is an all-in-one bundle, which includes the robo-pup, a three-year AI Cloud plan, a pink ball, an ‘aibone’, a charging station, and an “individually numbered commemorative dog tag”.

If you’ve already melted into a puddle of puppy-love induced goo, be warned: the Aibo First Litter Edition is vastly more expensive than your average pup at $2899.99, and if you pre-order now, your new family member could be with you in time for Christmas.

Not just for Christmas

The newest version of the Aibo has previously only been available in Japan, and it’s far smarter than its predecessors, with more artificial intelligence and powerful sensors that help it to understand and interact with its environment and its two accessories: a pink ball and chew toy.

Designed to act like an untrained dog, you can teach Aibo like you would a new puppy, using positive reinforcement and voice commands, which it responds to with varying degrees of accuracy depending on how well it’s been trained.

With the ability to recognize up to five people at a time and emotive responses to affectionate actions like petting and vocal reassurance, Aibo is sure to mollify even the grouchiest family member with its adorable OLED display eyes.

The Aibo First Litter Edition is available to pre-order from the Sony website, with early purchasers set to receive their new bundle of joy in December 2018.