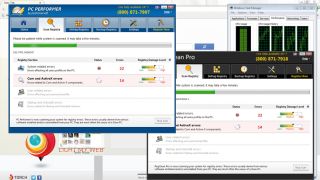 The problem, as the old cliche goes, is that there's no such thing as a free lunch. Companies and sites offering something for gratis tend to expect something in return - the question is, what? And, really, how bad can this deal with the digital devil be?

To try to answer that, we've taken a honey-pot system and gone out of our way to download, install, agree to and generally sweep up as many third-party add-ons as the internet has to offer. And boy, does the internet have a lot to offer. Why would we do that? Well, for a good old laugh, but also in the name of research. By breaking things you can learn a lot - not only how to avoid such dangers, but also how to fix them.

It isn't all bad news, as what can be installed can also be uninstalled. We might be attempting to hobble a system as badly as possible, but we're also going to try to bring it back from the brink. The most obvious help here comes from browsers providing ways of controlling, disabling and removing third-party add-ons and toolbars. As this is the most often used route of attack, then it's a handy way to stop any misbehaving plug-ins.

That's certainly not the end of your problems, as there are plenty of installer add-ons, but it's certainly a start. Users need to agree to download and install these, but people do and our aim is to see what happens after that. As part of this PC-killing project, we'll be keeping an eye on performance to see what effect such add-ons can have on system resources and stability.

It's also interesting to see what the security experts have to say on the subject and how you can better protect not only yourself, but your tech-clueless friends and family with a couple of basic tools.

Back in the day, when humble magazines ruled the shelves and Geocities seemed a good idea, there was a monthly tome known as PC Answers. Not surprisingly, it used to be a sister publication to PC Format. One of its most popular regular features was The Clinic, a monthly diagnostic dissection of a reader's broken PC. Having written that section for a number of years, editor Alan Dexter is probably twitching with a mix of posttraumatic stress from the latenight hairtearing sessions and trying to fix systems of their obscure ailments.

Despite its popularity, The Clinic was one of the most loathed sections to work on. That loathing was nothing to do with the readers involved, but the amount of time and effort required to actually figure out what was wrong with a system. Whereas you could spend an uncomplicated day reviewing a graphics card, the unknown complexities of what lay inside a The Clinic PC filled even the most hardened PC Answers expert with a sense of dread.

Horrible reminiscing aside, a common theme amongst The Clinic PCs was troublesome downloaded software. PC Answers even got caught up in the Comet Cursor controversy from the early 2000s, when we correctly pointed out how easily it could be unwittingly installed by users, while seemingly doing nothing but compromising your stability. Despite scaring PC Format's largely hungover legal team, the program was ultimately blacklisted by Symantec and Lavasoft as spyware. So, oddly, we're siding with them.