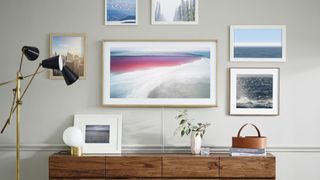 Updated: Samsung has just confirmed that The Frame, as it's now known, is available to buy in the UK now in both 55 and 65-inch versions with prices starting at £1,999.99.

OK, Samsung might be taking this whole ‘TVs are works of art’ thing a little too far. Need some evidence? Check out the Samsung Frame, a TV that hangs on the wall and actually turns into a picture display when you’re not using it.

The Ultra HD TV was unveiled at CES 2017 back in January but was billed as a prototype, not something we thought would be in our homes by the end of the year.

The Frame gives off a picture-on-wall appearance by using Samsung’s Invisible Connection cable and the No Gap Wall-mount from the QLED TV series to help the frame sit flat against the wall.

If this all sounds eerily familiar, it might be because LG released an incredibly similar TV earlier this month called the Signature Series W7 OLED that hangs on the wall and, by all accounts, looks exactly like a picture frame.

While LG’s screen has a Dolby Atmos soundbar attached to it and sports an OLED panel, Samsung’s Frame seems to be a bit less focused on function and more focused on form. The panel was created in collaboration with Swiss designer Yves Behar and has an ‘Art Mode’ that will display 100 art pieces in 10 different categories – including landscape, architecture, wildlife and more.

Clear the way for QLED

Also part of today's Frame announcement was the unveiling of the pricing for the 2017 QLED TVs that we saw at CES. The series starts with the Q7F, a flat-screen QLED TV. Next up is the Q7C, a curved version of the Q7F, and the Q8C, the higher-end curved panel. The pinnacle of the series is the Q9F.

Pre-orders for the TV start tomorrow, March 15, will go on sale March 29.