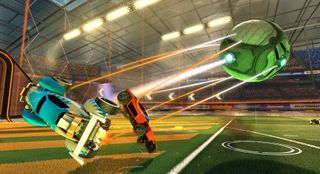 Rocket League developer Psyonix has confirmed in a recent blog post that the smash hit game will soon support the PS4 Pro.

Set for release on February 21, the update will allow PS4 Pro owners to run Rocket League in 4K at 60 frames per second (FPS) and standard PS4 owners to run it in 1080p at 60 FPS. This improved resolution and frame rate performance will apply across all arenas in the game’s single and two-player split-screen modes.

Three and four-player split-screen modes will still offer these resolutions and frame rates in some arenas, however, Psyonix has said it can’t guarantee them across all of them, especially the more graphically-demanding ones.

In addition to these technical improvements, the update will also see bug fixes and performance improvements, a Player’s Choice Crate filled with community-voted items, and some Hot Wheels DLC.

It’s good to see even more popular titles receive PS4 Pro patches that will allow owners of the console to see the advantages of its extra power, and the console’s new Boost mode should see minor performance improvements even in games that haven’t received an official patch.

To make sure you’re really taking advantage of your 4K console, don’t miss our picks of the best games to show off what the PS4 Pro can really do.