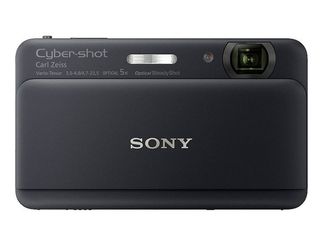 The world's thinnest compact camera has been unveiled by Sony

Sony has announced the new TX55 compact camera to fit into its Cybershot range, claiming it to be the thinnest compact currently on the market.

Measuring just 12.2mm thick (an iPhone 3GS is 12.3mm thick) the front width of the camera is only just slightly larger than a credit card.

Several measures have been put in place to ensure its small size. Firstly, the 5x optical zoom lens is periscope - meaning there's no protrusion from the body of the camera.

The TX55 takes micro SD cards, rather than standard full-sized SD cards to also help reduce size. Finally, the 3.3inch touchscreen on the rear of the camera means that the only physical buttons are the on/off button, shutter release and zoom switch.

The 1.2 million dot OLED backscreen measures 3.3inches, taking up almost the entire back of the camera, and can also be used to set the focus point when shooting. The TX55 is fitted with a back illuminated 16 million EXMOOR R CMOR sensor.

Back illumination maximises the space available for light reception and reducing noise, making it ideal for low-light and party situations.

Shooting with Superior Auto technology means the camera will take 6 shots in quick succession at different settings, varying the sensitivity and shutter speed. Images are then merged to create a single image with less noise and a sharp subject, with the camera automatically selecting which parts of the images to combine.

The camera is also equipped with picture effects software for producing creative photographs directly from the camera while shooting. Sweep panorama - the ability to sweep the camera across a scene to capture a panoramic image is also included, along with 3D shooting. Full 1080p HD movie recording is also available.

Sony claims that its new 'By Pixel Super Resolution' technology enables the 5x zoom range to be digitally extended to 10x without any loss in quality. The same technology also boosts still image quality during movie recording.

Thanks to the 'Dual Rec' feature up to 10 full resolution images (12 million pixel) can be grabbed without interrupting Full HD video shooting.

With the TX55's ultra small size, EXMOOR sensor and Superior Auto technology, Sony is very much targeting the type of consumer who might not typically carry a camera with them, instead relying on poorer quality mobile phones.

A Sony TX55 UK release date and price have not yet been announced, although we do know that the camera will be available in black.