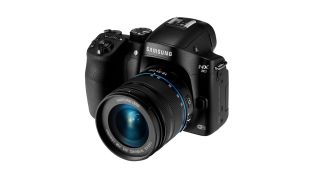 The Samsung NX30 and Galaxy Camera 2 rang in the New Year with some of Samsung's biggest camera announcements. Now, Samsung has finally priced and dated when cameras will come out.

The Samsung NX30 is a mirror-less camera with a high-resolution 20.3MP APS-C CMOS sensor that can take interchangeable lenses. But the biggest features of this camera are its extra connectivity options, including Wi-Fi and NFC.

By tapping the camera with an NFC-enabled smartphone or tablet, users can transfer an image directly over using the Photo Beam feature. New fangled technology aside, the camera is no slouch, and can take bursts of photos up to nine frames per second and 1920 x 1080 60fps video.

Shooters will also be able to look through the lens on a 1024 x 768 electronic viewfinder or a swivel out the three-inch, 2.36 million dot super AMOLED screen.

Next month, serious smartphone photographers will also be able pick up the Samsung Galaxy Camera 2 for US$449.99 (about AU$499.29). The Galaxy 2 camera is built around the idea of putting a serious sensor and lens on top of Android 4.3 Jelly Bean to take full advantage of camera apps on the Play Store.

The Galaxy Camera 2 itself features a 16.3MP CMOS sensor with a 21x optical zoom. With this in hand, the camera can shoot anything from miles away, and high-definition video at 1920 x 1080 resolution at 30 frames per second.

Like the Samsung Galaxy NX30, the Galaxy Camera 2 comes with a Wi-Fi, Bluetooth and NFC connectivity suite to link up with other devices wirelessly. Plus, with all the apps to download, the Android-powered camera can edit and upload photos directly onto Twitter, Instagram and even Dropbox.

Keep an eye out for Australian release dates.