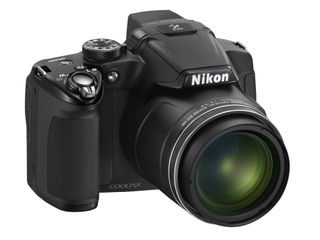 It also features a 16 million pixel backlit CMOS sensor, coupled with advanced lens-shift vibration reduction, both of which are designed to help when shooting in low lighting conditions

Along with HD video, slow and fast motion movies can be captured with speeds of up to 120fps (VGA). Movies can also be shot in iFrame format, while an inbuilt HDMI connector means you can hook up the camera directly to an HDTV.

Built in GPS is able to record the exact location a picture was taken.

Other features include Auto HDR mode, Easy Panorama mode, 3D shooting mode and high-speed continuous shooting at up to 6fps.

It is capable of recording HD video at 720p and unlike the P510, is powered by AA batteries.

Other features on board the L810 include 3D shooting and a smart portrait system which features the ability to take a picture when the subject smiles and provides blink warnings.

HD video recording is available at 720p, and is accessible via a dedicated movie-record button.

Specifically targeted at novice photographers, the camera includes 17 scene modes, along with a Scene Auto Selector for automatically choosing the best scene mode for any given situation.

All of the cameras are bundled with the View NX2 editing software, and all feature an EXPEED C2 processor.