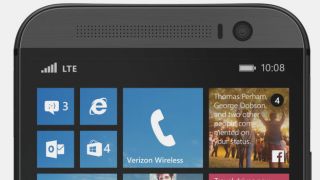 Alright, M8? You had your Windows done?

The rumours appear to be true. HTC will apparently launch a version of its flagship HTC One M8 smartphone running the Windows Phone operating system.

Following reports earlier this week claiming the device would be on the way, a press render of it has been spotted on the server's of U.S. mobile network Verizon, who will presumably be stocking the phone

The photo discovered by PCMag sources comes a little over two weeks before HTC holds a press event in New York on August 19.

Previous reports which dubbed the phone the 'One M8 for Windows' had suggested it will go on sale shortly after the reveal on August 21.

Speculation had suggested the device would come in silver and would be identical to the Android version, aside from the obvious OS differences.

The Windows Phone 8.1 device will also support smart cases like the innovative Dot View cover and would offer voice over LTE in the United States.

Should the device launch, it'll be HTC's first Windows Phone in over a year. Both Microsoft and HTC have declined to comment.