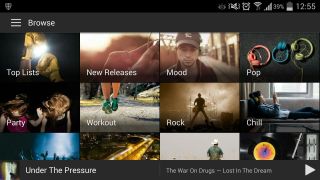 Android users who have been looking jealously on as their iOS counterparts coo over the new-look Spotify app need envy no more: the revamped app is rolling out to Android tablets and phones starting today.

Over the next few weeks, all Android users should receive the update which brings a sleek new look, improved Browse feature and Your Music to the Spotify party.

Your Music lets you save songs and albums to your personal Spotify library rather than creating playlists to house them - the only downside is that the popular song starring feature is going the way of the dodo.