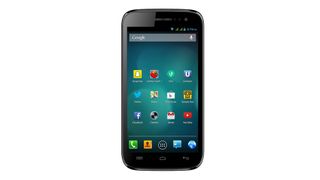 Kogan enters its 5-inch, quad-core beast into the arena...

With all the excitement over the past week surrounding the upcoming release of Apple's iPhone 5S and 5C, and the recent announcement of the Samsung Galaxy Note 3, you might be looking at your wallet with a bit of concern.

The new iPhone prices range from $739 up to $1129, while the Note 3 is priced near $1000 as well, which means that for most, the most viable option would be to get these handsets on a plan.

But if you don't want to lock yourself into a plan, Kogan has a new quad-core Android smartphone for just $199.

"Some big tech companies think they can launch a phone for the budget-conscious consumer and still price it at over $700," said Rulsan Kogan, CEO and founder of Kogan.

"We think everyone should be able to afford a great smartphone that has all the main features that you want, without paying for features you don't need."

While the new Kogan-branded handset doesn't quite stack up against the Note 3, iPhone 5S and even the lower-specced iPhone 5C in terms of internals and overlay features, it is almost five times cheaper.

The Kogan Agora smartphone is powered by a 1.2Ghz quad-core processor and 1GB of RAM running Android Jelly Bean 4.2.

While it only has 4GB of internal storage, you can expand that up to 32GB with a microSD. It also has Bluetooth 4.0 and Wi-Fi, but no 4G.

You can pre-order the phone now for $199, but like the Note 3, it will ship out starting from October 3.